Dinner at Lozada's makes for an exotic, sometimes exasperating experience. 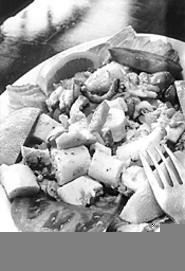 Walter Novak
Dig in! Octopus Salad With Plantains and Garlic Sauce.
The service is indifferent, the menu is confusing, and the decor would be the envy of any 13-year-old baseball freak. But what quirky little Lozada's Puerto Rican restaurant lacks in grace, it makes up for in color, verve, and authenticity.

Founder and home-taught cook Santos Lozada Sr. opened his original Cleveland restaurant on Lorain Avenue in 1983, eventually moving to cosmopolitan West 25th Street, within a stone's throw of the West Side Market, in 1994. Since then, he and his staff (including son Santos Jr.) have transformed the neat but otherwise undistinguished little dining room into a sort of shrine to the Latino ballplayers who occasionally find their way from Jacobs Field to the near West Side for post-game festivities. Bright team banners wave from the ceiling. Framed and autographed photos and posters blanket the walls. And a jagged cityscape of trophies from restaurant-sponsored softball teams towers near the front door.

As for the food, it is as unpretentious as the decor. Puerto Rican cooks (toiling in their "cocina criolla" or, literally, the Creole kitchen) are inheritors of a true world cuisine, one that blends native Arawak and Taino staples with Spanish and African influences. Unlike in some Latino cultures, meat plays a significant role in the Puerto Rican diet, while spice blends, like sofrito and adobo, are heady but rarely hot.

Lozada's large, bilingual menu seems to have captured the essence of traditional Puerto Rican fare, with a wide selection of steaks and seafood, as well as simpler dishes like beans and rice. Nonetheless, the food's a far cry from fancy and is anything but health-conscious. Many of the menu items are fried; fresh vegetables are a rarity. Right up front, I will admit that we passed over the gizzards, the scrambled eggs with codfish, and the goat stew -- although after trying its cousin, a robust and well-prepared beef stew, I'm rethinking that final omission. But there were plenty of other tasty dishes to sample, and other than an unimpressive flan, we found few disappointments.

It's too bad, though, that the six-page menu isn't more descriptive. For instance, we are still trying to figure out the crucial differences between, say, the $8 carne guizada (beef stew) dinner with beans and rice, and the $6 carne guizada combination plate with beans and rice. Or take the plantain, that firm, overgrown variety of banana: This workhorse of Latin American cooking shows up repeatedly on the menu in a variety of guises, including as a foil for more carne guizada. But what, we wondered, is the difference between a sweet plantain and a fried plantain? And when is a fried plantain a better choice than a mashed plantain? The menu is strangely silent on such weighty issues.

Our servers proved similarly close-mouthed. Whether it was due to a language barrier or simple fatigue from answering Anglo questions ad nauseam, we never discovered. But our conversations with our waitresses were always strictly limited in scope and never particularly illuminating. Toss in the fact that both the servers and the kitchen apparently adhere to their own secret time clock -- one that commanded, for example, that some, but not all, of our appetizers should be served right along with the main courses, and that our check should arrive mere seconds before we expire from tedium -- and you will see that a sense of adventure is essential when dining here, and a sense of humor is a major plus.

But all that said, we would happily drop everything to rush back to Lozada's and stuff ourselves with more of those warm empanadillas: puffy half-moons of tender pastry, plumped up with a flavorful blend of ground beef and potato, and deep-fried to a crunchy turn. Or the homemade tacos, all delicate and golden brown, filled with lean ground beef, a bit of shredded cheese, and some juicy tomato, with just a hint of peppery heat. Mmm . . . mighty good eating, those.

Other casual street-food-style starters include the football-shaped alcapurrias (banana balls) and the round relleno de yuca (cassava balls), both ground-beef-stuffed and deep-fried little snacks wrapped in irresistibly chewy, mashed-potato-like crusts. And while we found the tostones (crunchy patties of coarsely mashed and fried plantain) to be bland, we were delighted to have stumbled upon the sorullos de queso: sweet, crusty little cornmeal torpedoes, similar to hushpuppies, filled with a ribbon of melted cheese.

While fish, flesh, or fowl is featured in most of Lozada's main dishes, portion sizes are modest by mainland standards. A small bread plate was large enough to hold our serving of succulent roasted pork. A tiny boneless, skinless stuffed chicken breast (pechuga rellenado) yielded no more than four or five bites, although it was moist, tender, and drenched in a thick, mild tomato-based sauce with lots of sweet, lightly sautéed sliced onion. Two twisted and tortured-looking deep-fried pork chops (chuleta frita) were thin, but pleasantly chewy and savory. Bistec blanco, a wide but equally thin slice of bottom round steak buried beneath more sliced and sautéed onion, was reasonably tender and satisfyingly beefy. However, a well-prepared main course of sautéed shrimp (camarones ala ajillo) -- at $20.50 one of the menu's most expensive offerings -- gets our vote for all-around winner, with its heady garlic-butter sauce and relatively generous portion size.

Do not fear, however, that you may go hungry here. Most meals are rounded out by huge portions of delightfully saucy pinto beans, accented by cubes of potato or the occasional pig knuckle, and by platters of perfectly prepared short-grain rice. (If you're feeling flush, spend the extra half-dollar on the alternative "yellow" rice, colored with achiote seed and flecked with fat black pigeon peas.) In place of bread, the rice provides a filling and delicious way to sop up the flavors of the beans, meats, and various sauces.

Perhaps as a concession to Anglo tastes, some of the meals also offer the option of greasy frozen french fries and a puny head-lettuce salad, topped by bottled dressing, in place of the luscious beans and rice: Avoid these at all costs. However, anything accompanied by mofongos (a great word, signifying mashed seasoned plantains) gets the nod from this quarter. Salty, dense, and sparked with the occasional crunchy bit of pork rind, the plantains readily absorbed the rich flavors of go-withs like the deeply braised beef stew and an intensely flavored chicken broth.

The beverages at Lozada's are strictly non-alcoholic, with canned Goya juices, in flavors like tamarind, pineapple, guava, and passion fruit, among the more exotic choices. In the absence of Puerto Rican beer or, what would have been even better, rum, we also tried the dark malt soda, a bottled carbonated beverage made with barley malt, hops, and sugar; it had a dense, molasses-like flavor that reminded us of English stout, without the payoff. Desserts, too, are ho-hum, with the only choices being unremarkable cheese or vanilla flan, topped with a maraschino cherry. (If you dine at Lozada's early enough, you can stroll over to nearby Lelolai Bakery afterward for some really good flan or cheesecake; unfortunately, the bakery closes at 6 p.m.)

Of course, its eccentric decor, blasé service, and cryptic menu are a large part of what gives Lozada's its inimitable character, and along with the good-tasting dishes, they turn a visit here into an inexpensive and entertaining diversion. That is, after all, the charm of all tabletop traveling: It's different, it's delightful, and it's close to home.