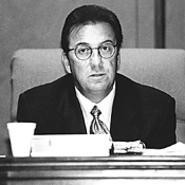 Walter Novak
Carr says his $95 hourly fee is a bargain, noting that private clients pay $200.
Mayfield Heights Law Director Leonard Carr doesn't want to talk about the Ohio Ethics Law or allegations that he is breaking it. Criticism of his billing practices is ridiculous, he says, his voice rising ever so slightly. Any complaints that residents have are pure politics.

"The thing you have to understand is that this is an election year," he says. "There are no issues this year, because the mayor has done a good job, at very low pay, and spent a lot of time doing it."

Carr takes off his glasses. A trim, intense man in his 50s, he will repeat the gesture several times in the next 30 minutes. On, off. On, off. He doesn't crack a smile. Behind him gleams the wood paneling of his office's conference room. Attorney L. Bryan Carr sits at his left, a young, silent version of his father.

"So whoever might be running for mayor or for council needs some kind of issue," Leonard Carr continues. "And law department billings have been issues time and time again. This is something that comes up like the crocuses every spring."

The issues facing Leonard Carr this summer are threefold. First, his son has worked for Mayfield Heights' law department for five years. Some experts say his work may be illegal. Second, Carr has been taking a cut of the hourly rate that Mayfield Heights pays his assistants. That, too, may be illegal. Third, the city's legal bills have risen higher than those of similar cities, prompting criticism of Carr and his boss, Mayor Margaret Egensperger.

The questions have surfaced in this East Side suburb before. A freelance journalist named Terry Troy questioned local officials about Carr last year, but his story never made it to print. No one at City Hall takes the issue seriously.

Neither Leonard Carr nor L. Bryan Carr stand accused of any crime; nor are they the target of any government inquiry.

"If I wasn't happy with [Carr], I wouldn't have appointed him for my second term," the grandmotherly Egensperger says. "I plan to win in November, and I have no plans of changing my law director." The questions, she says, are "not a concern." Council feels the same way.

Ohio's ethics law forbids public officials from placing relatives on the government payroll. Yet L. Bryan Carr, son of Leonard, has represented the city in court, filed briefs on its behalf, and run up $140 hotel room tabs and $17 valet parking charges. He's been quoted in The Plain Dealer as an "assistant law director" and "assistant to the law director."

Jennifer Hardin, chief advisory attorney for the Ohio Ethics Commission, thinks this might be a problem. "The law provides a specific exemption for law directors and prosecutors, that they can provide contract work to business associates," which most other officials are barred from doing, Hardin says. "But in that exception, they specifically cannot use family members."

Frederic White, a professor at Cleveland Marshall School of Law, says that L. Bryan Carr's work appears to violate the law. And even if it doesn't, it's still a problem. "It erodes public confidence in the political process," he says. "It's not necessarily that the children are bad employees. They may be great. But it looks bad, like they've been given the job by the fact of their birth, not their ability."

For all the work he's done for Mayfield Heights, there is no way of knowing just how many tax dollars have gone to L. Bryan Carr. Leonard Carr receives a monthly retainer of $2,889 for attendance at council meetings and routine business. For litigation and "matters of an extraordinary nature," he bills the city $95 an hour. Those bills range from $7,000 to $21,000 monthly and cover work done by Carr and his associates, including his son, says city Finance Director Robert Tribby.

But the bills lead to another question. In a deposition for an unrelated case in 1997, Carr detailed his billing practices. He testified that he bills the city at his hourly rate -- $85 at that time -- for work done by his associates, then pays his associates $28 an hour.

State law indicates that a law director may farm out work only if he "does not receive a distributive share or other portion . . . of the earnings." In other words, Carr cannot take a cut. Hardin says she can't comment on specifics, but past Ethics Commission opinions indicate that his billings may be illegal.

"A law director can't hire a relative, and there's no provision for an 'assistant to the law director' -- or for double billing," says attorney Rick Eisenberg. Eisenberg jokes that he specializes in representing citizens who take on Mayfield Heights. It's a "vindictive" city, he says, and clients are plentiful. "The code allows him to have assistants if council appoints them. But he can't share in the compensation, and they never did appoint them."

The practice, Eisenberg says, has caused repercussions. "The practical effect of all of this -- I would wager that, if you were to go to contiguous cities and add up their legal costs, their fees combined wouldn't add up to Mayfield Heights'."

The dollars pay for far more than the law director's services, but the fees paid to Carr and his firm also surpass those of other cities. Carr's retainer and billings cost Mayfield Heights $147,417 in 2000. In the same year, Fairview Park's law director earned just $35,000 and his firm an additional $27,102. Willoughby's law director, hired with his firm for a flat rate each year, earned $98,054.

Yet Carr believes Mayfield Heights is getting a bargain. Private clients pay him $200 an hour; even law directors in smaller cities earn a higher hourly fee than he does, he says, brandishing newspaper clips to prove it. "I'm almost a 30-year lawyer, with, by the way, a spectacular record on behalf of the City of Mayfield Heights, okay, in terms of wins and losses in litigation," he says. Carr also believes Mayfield Heights' bills look big because the city doesn't have liability insurance like many other municipalities. The insurance covers attorney costs if a city is sued; Mayfield Heights must pay its own way.

Carr believes the questions about his work are all unfounded. Even his son's work draws a ready justification. Carr points to a different state law that grants the city "legislative authority" to hire any legal counsel it chooses.

City Council Clerk Lisa Benedetti says council never signed off on L. Bryan Carr's hire, either through a vote or written correspondence, or indeed the hire of any other associates. But Carr says the Mayfield Heights charter gives the mayor power to circumvent council. "If I need an assistant, I just ask the mayor. You get the authorization, and it's done," he says. Carr concedes that he never asked the Ethics Commission for its opinion.

"I don't have to talk to the Ethics Commission," he snaps. "[The city has] the legislative authority to do that."

Carr also rejects criticism about his billing. He doesn't suggest that his practice has changed since his 1997 deposition, only that the $95 hourly billing is necessary. "Who pays for overhead?" he asks. "I don't think that applies. The overhead needs to be paid. The city doesn't supply any money for overhead." End of subject.

When he isn't blaming election-year politics, Carr blames one man: self-appointed Mayfield Heights watchdog Lindell Riddle. Riddle and Egensperger's administration have been locked in legal battles for nearly her entire eight years as mayor. Before even consenting to an interview, Carr mailed Scene a letter detailing Riddle's history and excerpts from court decisions against him. Critical passages were flagged with yellow Post-It notes and neatly highlighted.

Riddle knows he has few friends at City Hall. He says he pressed several council members about L. Bryan Carr's work, but no one would listen. Many of them apparently disregard anything Riddle says. And Riddle knows he can be annoying. Councilman Howard Sonenstein even earned a conviction for disorderly conduct after allegedly punching Riddle in a parking lot.

But Riddle won't take responsibility for the questions circling Carr. "There are some 3,000 attorneys in Cuyahoga County," he says. "Of those, 2,999 would have been legal for Carr to use as an assistant. He went out of his way to choose the sole and only one who violates state law. Now that's a problem."

Not a single city official agrees. From L. Bryan Carr's work to Leonard Carr's bills, no one is worried. They all praise L. Bryan Carr. Councilman Sam Mercurio suggests that Leonard Carr's cut pays for time reviewing his associates' work. Sonenstein says Riddle may be to blame, just as he was in Sonenstein's disorderly conduct conviction. Council President Charles Pona says he doesn't know enough to judge. "If something unethical or illegal is happening in any department, I'd be concerned and I'd do something about it," he says. "But as an attorney, I'd like to see proof that's happening and give Mr. Carr an opportunity to comment on it."

Even the councilman challenging Egensperger this fall, Don Manno, declines to blast Carr. Manno says he's more concerned that Egensperger is overreliant on Carr, a charge the mayor flatly denies.

And so Mayfield Heights stands by its law director. In the end, Egensperger says, the law may need to change, not Carr. "Maybe the laws should be written or defined that you can use anyone on your staff, even if it is your son," she says. "What if that's your only partner? What are you going to do? If I were the Ethics Committee, I wouldn't even take the time to look at this."