When it comes to rock and roll, Jett is an icon. 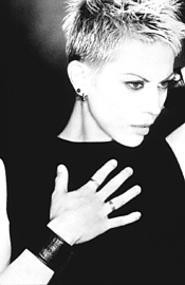 Joan Jett: It's almost religious.
Trying to summarize Joan Jett's contributions to rock and roll, former Rolling Stone editor and renowned rock writer Dave Marsh probably came as close to a suitable distillation as anyone. "Joan Jett is the female Chuck Berry," he wrote with admirable concision. While that is hardly the definitive assessment of Jett's place in rock and roll history, it strikes at the heart of the matter: Joan Jett is, at the very least, an icon, if not already a legend.

"All I can say is that I only hope that my music will last," a smoky-voiced, soft-spoken Jett says via phone from her Long Island home. She's 25 years into a career that began with the now-legendary all-girl rock combo the Runaways, and she came into her own with the release in 1981 of her first solo record, Bad Reputation. So it's puzzling to hear her express any sort of self-doubt. But the always unpredictable Jett sees things a bit differently.

"There isn't a day that goes by that I don't take a moment to thank the universe for what I have," Jett says thoughtfully. "I always try and keep in touch with -- and be thankful for -- the good fortune I have had in being able to do what I love to do for a living: my work, if you can call it that."

Jett may be the last of a dying breed of rock-and-roll true believers who are still dedicated to the art of "two guitars, a bass, drums, and a handful of power-chords," as she puts it. Ironically, such rock ideals are not particularly fashionable these days, just as they weren't 22 years ago, when Jett first circulated demos of her now-classic "I Love Rock 'n' Roll" and her spot-on cover of Tommy James's "Crimson and Clover" -- to no response whatsoever.

"I figured that either they didn't listen to those tapes, or that they just couldn't hear hits," Jett laughs. As a means to get her music out, Jett and manager/producer/friend Kenny Laguna resorted to a do-it-yourself approach that has been aped by independent rockers ever since: They formed their own label -- Blackheart Records.

"I just wasn't ready to accept people telling me that I couldn't do this," Jett says of her solo rock career. Blackheart has since expanded into a management and film company that also does distribution, booking, merchandising, and music publishing. There's very little argument to be made about her success -- or her impact on the industry.

"Joanie was the first," Laguna says. "She was the original. She is real. What you see is what you get with Joanie; there's no pretension. The reason that so many of the rock and rollers now cite her as an influence is because of that. She really believes, as corny as it may sound, in rock and roll. She doesn't believe in selling it out."

Jett has such enormous reverence for the music that she even has misgivings about the general use of the term "rock" in today's consumer culture.

"It drives me absolutely crazy when I hear people describing things as 'rock,'" Jett fumes. "Like when an advertisement will say that a car 'rocks,' or that some pop song 'rocks,' or this 'rocks,' that 'rocks.' That pisses me off. A car doesn't 'rock,' things don't 'rock,' only rock and roll can rock. And there isn't much that rocks right now."

In a similar vein, Jett, who has become an unintentional and widely recognized symbol of feminism in music -- something she quietly embraces -- doesn't consider herself to have many female peers.

"There are a lot of women in music these days, but it annoys me that any girl who sings seems to be called a rock singer now," she says. "The press keeps saying there has been a revolution in rock for women, but there really just aren't many women into rock right now."

Actually, these days, she says, there's not much rock and roll, period.

"To me, rock means three chords and distorted guitars. And it's weird. It's almost like nobody is playing real rock and roll anymore. I mean, you just don't hear it anywhere. So in a way, I feel like I have a responsibility to carry the rock torch for a while."

Not that she thinks rock and roll wouldn't survive without her. Recently, she took an eight-month hiatus to star in the Broadway-stage revival of the Rocky Horror Show. "I didn't want to get too burned out on music," Jett explains. "I'd been completely focused on music since I was 15, so when this unbelievable opportunity arose to do the Rocky Horror thing, I saw it as a chance to expand myself, as well as to take a break from my life for a bit."

Rocky Horror "was a big thing to me when I was young; it was a big part of my youth that coincided with being in the Runaways. So this was a perfect thing for me to do. But now, aside from a small part I am doing in an independent movie, I am back to writing songs and playing shows for the summer."

Jett could have used some time off after her Broadway stint. "I don't think anyone realizes how much hard work that is," she says of her stage experience. "Eight shows a week, every week. Singing, dancing, acting -- it really is quite exhausting." But she couldn't resist the urge to get back on the road and play rock and roll.

"There's just something about it," she muses. "There's just something about being onstage and feeling that connection with everyone out there in the audience. It's almost religious, you know? When I'm up there and I feel that thing -- that twinkle in my eye -- I hope to look out and see it in other people's eyes, too, because that's what it's really about. Rock and roll is about connecting. There just isn't anything else like it."