The men behind Medina's toy train museum take pride in their one-track minds. 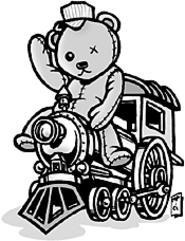 Mark Poutenis
John Ormandy is a robotics expert for General Motors; his friend John Shephard is a semiretired graphic designer. But in their minds, they're workin' on the railroad all the livelong day.

Earlier this year, Ormandy and Shephard opened the Medina Toy & Train Museum, a converted apartment on Medina's Public Square dedicated to classic locomotives and their history.

"I've been wanting to do this a long time," says Ormandy, a 64-year-old, self-proclaimed geezer who, for 10 years, has moonlighted at the Medina train store that bears his name.

The Johns got serious about a toy train museum when Shephard retired in 1999. After two years and numerous meetings of a four-member board of directors, the Medina Toy & Train Museum opened in March.

"What we're trying to do, in miniature, is allow the viewer to not only enjoy himself, but to learn something about the item he's viewing," says Shephard, an adroit man of 71, who suffered a mild stroke in mid-August.

The museum's collection numbers some 400 locomotives gathered over 40 years. The cozy, second-floor space features an elaborate train layout and case after case of vintage locomotives, with plaques detailing their histories. There's also a room dedicated to antique metal toys and another for vintage dolls and teddy bears.

Ormandy and Shephard say the museum has room for only about 10 percent of their collection -- a fact that has stoked their greater goal.

"We need $3.5 million for a 30,000-square-foot museum," says Shephard, sharing his vision of a three-story structure, complete with a workshop, an outdoor riding train, and a real caboose.

Indeed, there's a lot of work left on this railroad. But it's not without its rewards -- like the time a young visitor stopped Shephard in his tracks.

"She walked up to me and tapped me on the leg and said, 'I want to thank you for having us today. It was very, very nice, and we're going to come back.'"