Ohio continues its crusade to keep people like John Hartman off the ballot. 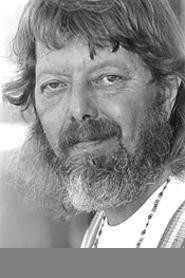 Walter Novak
John Hartman.
John Hartman is a dangerous man, though it may not be apparent at first glance. Soft-spoken, slight of build, middle-aged, and bearded, he looks more Father Christmas than Fidel, more likely to nap through a revolution than incite one. And while rainbow-striped suspenders say many things about a man, "I'm dangerous" isn't one of them.

As a candidate for Lakewood City Council, Hartman's platform is a refreshing mix of the pedestrian and the impractical: reformulation of property taxes, plans for a new skateboard park, a resolution supporting the medicinal use of marijuana. The latter is a stand that should surprise no one, given Hartman's day job -- operating Cannabis Connections, a head shop on Madison Avenue, and running the local office of the National Organization for the Reform of Marijuana Laws.

He admits he's running an "inactive" campaign, by which he means comatose. He's spent almost no money, no time seeking support. He's on the ballot simply to get his views out and "plant the seeds" for unconventional candidates in the future. "A political campaign is the one area where individuals can come forward to express their views and have people pay attention," he says.

Yet peril is what Secretary of State J. Kenneth Blackwell sees when he contemplates Hartman's candidacy, and he's doing his best to thwart it. To hear Blackwell's aides tell it, Hartman isn't just a fringe candidate in a piddling suburban council race. He signals the breakdown of law and order, a man who, as one state official ominously intones, could set "a dangerous precedent."

His transgression: He isn't a Democrat or a Republican.

If there is one person to blame for Hartman's predicament, it's Harry Truman. In 1948, he carried Ohio by just 7,000 votes over Republican Thomas Dewey -- a margin that would have been considerably higher if not for the Progressive Party candidacy of former Vice President Henry A. Wallace.

Wallace pulled in 30,000 votes that year -- 30,000 too many, as far as Ohio politicians were concerned. So lawmakers decided to make it laughably difficult for alternative parties to get on the ballot. In order to qualify, a third party had to obtain signatures equal to at least 15 percent of the votes cast in the previous gubernatorial election -- a number that would equal 530,217 today. Democrats and Republicans, meanwhile, remained on the ballot as long as their gubernatorial candidates received at least 10 percent of the vote.

The law was nakedly undemocratic, but also effective. It took 20 years before the statute was even challenged. Finally, in two cases brought before the U.S. Supreme Court in 1968 and '71, Ohio's ballot laws were found unconstitutional. "The Ohio system does not merely favor a 'two-party system,'" wrote Justice Hugo Black. "It favors two particular parties . . . and in effect tends to give them a complete monopoly."

The laws eventually changed, even if attitudes didn't. To this day, Ohio has never altered its access laws without being forced by court order. "There is just something about Ohio's political culture that's conspicuously hostile to small parties," says Richard Winger, an election law expert who runs Ballot Access News.

In 1998, the Libertarian Party sued the state after James Schrader, a congressional candidate in southern Ohio, was barred from having his party affiliation on the ballot. In the eyes of the state, the Libertarians hadn't met official party standards, so Schrader was labeled an independent. (The case has been appealed to the U.S. Supreme Court.)

Last year, the same issue arose with Ralph Nader's Green Party presidential bid. Nader sued and won in federal court -- a decision that Blackwell said would put "the integrity of our ballots at risk." It turned out to be a hollow victory for the Greens: The decision came too late to be implemented.

Skirmishes over election law tend to generate about as much excitement as the Steubenville Sewer Commission, but the disputes are important. Studies show that candidates with party affiliations get about twice as many votes as those without, says Dave Ellis, a member of Cleveland's Green Party. More important, says Natural Law Party of Ohio Chairman Dennis Slotnick, "You get recognized to do public speaking; you get recognized with a platform that's nationwide; you have basic principles that people can align with."

Yet even when a minor party succeeds in getting recognized in Ohio -- which now requires rounding up 33,542 signatures -- its battles are far from over. Case in point: John Hartman.

Two years ago, the Libertarian Party filed petitions to become a minor party. The designation allowed more than 70 candidates to run under the group's banner in 2000. Eight months after that contest, Hartman filed to run in Lakewood as a Libertarian. There was one problem: County officials said the party was no longer recognized in Ohio.

The response was no surprise to Libertarians. They knew the state considered the party dead immediately following the 2000 election, when the Libertarian presidential candidate, Harry Browne, failed to gain at least 5 percent of the vote. "That's the threshold," says Carlo LoParo, a spokesman for Blackwell.

Hartman's candidacy was a way to test the law. "We knew we had to force the issue," says Dena Bruedingam, the Libertarians' Ohio director.

At "issue" is the meaning of a 40-word clause in the state code. The Libertarians' argument would need a Ouija board and an overhead projector to do it justice, but the short version goes like this: Because they submitted their petitions for party recognition in November 1999, the 5 percent mark doesn't come into play until the 2002 election, since the law provides a 12-month grace period that would exclude the 2000 race.

In short, says Donald Gallick, Hartman's attorney: "If an election falls within that 12 months, we don't count it."

The Cuyahoga County Board of Elections agreed, at least initially. On September 4, it ruled that Hartman should appear on the ballot as a Libertarian. Yet within days, Blackwell asked it to reconsider the decision. The ruling, he argues, would result in minor party candidates flooding races across the state.

"Letting a candidate have a ballot ID whose party isn't qualified would set a dangerous precedent," says one state official.

The rhetoric is a tad on the breathless side, since the obvious question is, What's the harm? Electoral chaos, replies LoParo. "I could be from, I don't know, the Steamboat Party and cite [Hartman] as a precedent."

Adds Roger Synenberg, a member of the Cuyahoga County Board of Elections: "You don't want to get 100 minor parties on there."

Yet to Libertarians and other minor party activists, the state's interest in a Lakewood City Council race isn't about ensuring efficiency; it's about preserving business as usual for Democrats and Republicans. "The problem is, the law is bad to begin with," says the Green Party's Ellis.

The result is elections that seem tailor-made to disaffect voters, says the Natural Law Party's Slotnick. "It's undermining our democratic process. If people only see two choices, and none of them sound like their choice, they don't vote."

But if Ohio's history is any guide, the situation isn't likely to change soon. On September 12, after Blackwell's office asked the four-member Board of Elections to review its decision, the panel revisited Hartman's case. This time, it split 2-2. The tie does not bode well for Libertarians.

Blackwell gets to cast the deciding vote.