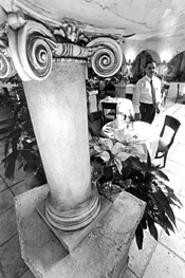 Walter Novak
Mosaica's romantic atmosphere and lush decor have diners flocking to Westlake.
The Mediterranean decor at Mosaica, Westlake's wildly popular new restaurant, may not be authentic, but that's not to say it's unimpressive. From the Corinthian columns guarding the painstakingly distressed front door, to the coarse limestone tiles and intricate mosaics that pave the floor of the sky-lit rotunda, the place radiates the romance of an ancient temple, albeit without the serenity.

That rotunda, complete with a burbling fountain, lush greenery, and a handful of tables, forms a sort of central hub through which staffers fairly scamper on their way to and from distant regions of the 220-seat restaurant, including its four additional dining rooms and an expansive, high-ceilinged bar and lounge. Throughout the space, evocatively aged frescos decorate simulated stucco walls; artificial ivy climbs past artfully exposed brick; and ceilings are adorned with the painted images of everything from pudgy golden cherubs to leering satyrs and perky nymphs. Even the restrooms are extraordinary, with colorful tile work, thick marble countertops, and rough-hewn limestone washbowls. Taken together with the white table linens, candlelight, and fresh flowers, it all comes together to create an undeniably handsome setting, even if its simulated splendor isn't everyone's cup of tea. "Rustic opulence!" swooned one evening's companion, for example. "One faux brick short of Disney World," sniffed another.

This dichotomy of appearance and reality also extends to the kitchen. Mosaica is the joint project of Peter Diamantis, formerly chef at Johnny's Bar, and George Voutsiotis, who owned Georgio's in Lakewood. The men, along with chef Warren Dolata (former executive chef at Erie Bleu), have combined their considerable talents to devise a large menu of luscious-sounding items, full of mouthwatering phrases like "carrot-ginger broth," "smoked shiitake butter sauce," and "truffle flan." But more than a great read, the menu is also a demanding collection of labor-intensive dishes that would provide a challenge for any kitchen, let alone one that cranks out as many as 300 meals on a Saturday night.

It is, therefore, fairly predictable that while much of the food is delicious, not everything comes out of the kitchen in tip-top form. In fact, for every truly stunning composition that we encountered -- say, an entrée of firm roasted cod, draped with a heady sauce of vermouth and melted brie, and served on a crisp galette of shredded potato and celery root, sided by a tiny, quivering flan infused with the earthy essence of black truffle -- there was another that more or less missed the mark.

Take, for instance, an appetizer of seared foie gras (now off the menu), a classic first-course luxury that, despite its hefty $15 price tag, was impossible to resist. What we got, however -- a scant serving of mostly melted duck liver settled on a thick slice of too-sweet "French toast" brioche, its distinctive flavor further obliterated by a peppery orange marmalade and a vigorous dusting of powdered sugar -- was a waste of good foodstuffs. Also disappointing was an appetizer of prosciutto-wrapped sea scallops, slightly overcooked and slightly gritty, served on a bed of herbed risotto that was veering toward gumminess. And a starter of wild mushroom, thyme, and goat cheese strudel, served in a pool of delicious veal sauce, was pleasant enough, but gave no evidence, in either appearance or taste, of actually containing any goat cheese. In fact, the most successful first-course dish was probably the least complicated: a platter of rustic, pistachio-studded veal pâté, with a delicate, wholesome flavor that was delightfully piqued by tiny cornichons, slender pink rings of pickled onion, dabs of creamy Dijon mustard aioli, and crisp little crostini that melted on the tongue like butter.

Entrées -- everything from free-form vegetable ravioli to pork chops au poivre --come with the Mosaica Salad, a fine mix of organic greens tossed with an exceptionally bright champagne vinaigrette and gussied up with goodies that include shaved fennel, red seedless grapes, and sugared pecans. But -- especially for such a simple dish -- the lack of consistency in preparation was disconcerting. On a Thursday night, for instance, when the house wasn't quite at capacity, the tasty add-ons had been applied with a generous hand, making the salad a real knockout; but on a hectic Saturday night, the pecans and grapes were in markedly short supply, and search as we might, we could discover only one lonely sliver of fennel in our two salads, combined.

Nonetheless, there were several dishes, well conceived and almost flawlessly executed, that pointed at the heights the kitchen is striving toward. As with the roasted cod, we had nothing but praise for an entrée of plump ravioli, filled with a mixture of sweet potato and sweet corn, and cuddled down in a rich, but gracefully restrained, cream sauce of mascarpone, prosciutto, and sage. Medallions of hanger steak, served medium-rare around a hillock of smooth mashed potatoes and finished with an herby bordelaise, nearly embarrassed us with their succulence. And scaloppini of veal, with a mild, natural sweetness, were imaginatively matched with shiitake mushrooms, caramelized fennel, and sundried tomatoes, for an almost fruity interplay that was underlined by a sweet vermouth demi-glace.

The veal dish included tender-crisp haricot verts, whole baby carrots, and mashed potatoes, along with -- surprise, surprise -- a small wire that apparently came off a kitchen pot scrubber. We discreetly brought the problem to our waiter's attention (after all, these things happen, and it should be of great interest to the kitchen when they do), and he acquitted himself admirably, alerting a manager and offering either to bring us a new entrée or to take the cost of the first one off our bill. Such prompt, sincere service is always appreciated and, not incidentally, it goes a long way toward helping a restaurant develop a devoted clientele, despite any other shortcomings.

Beyond the ubiquitous crème brûlées and chocolate terrines, pastry chef Robert McGorray creates several unusual desserts, including a not-too-sweet pistachio-encrusted lemon torte, and a wonderful warm pineapple upside-down cake, all sweetness and light, served on a macadamia nut crisp and sided by homemade vanilla ice cream and dollops of crème Anglaise. Cups of cappuccino, with thick, frothy heads, made a robust counterpoint to the delicacies.

Mosaica's wine list contains plenty of familiar West Coast names, along with a few Italian reds, some French bubblies, and an Australian Shiraz or two; prices range from $18 for a Firestone Riesling to $300 for a bottle of Château Lafite Rothschild, but plenty of good options are pegged at or below the $30 mark. By-the-glass choices are reasonably priced at $5 to $7, and, unlike many places, the bar poured even an inexpensive Merlot into a big, roomy wineglass. However, it would be a plus if half-bottles were available, and we were surprised that neither vintages nor countries of origin were listed for the majority of entries.

Despite rough spots, it's worth remembering that Mosaica is still relatively new and has been inundated by big crowds since the day it opened. It is to be hoped that, with more time and a chance to regroup, the kitchen's handiwork will begin to consistently duplicate the delicious images evoked by the menu, and Mosaica will become a place of both substance and style.