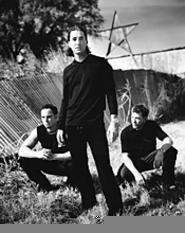 Creed
For four years now, Creed has bullied airwaves with its incessant, God-fearing grunge ballads. But who's complaining? Millions obsess over these slobbering rock clods every day; hordes of fans fawn over the band's ill blend of grungy hooks, Zeppelin riffs, and queasy Christian lyrics. They figure Creed's just too complex to be dismissed as doppelgängers of Seattle pundits Pearl Jam and Alice in Chains. Ask anybody. The folks at the Grammys, Billboard Music Awards, American Music Awards, and yes, even the VH1 Music Awards agree with tone-deaf Joe Consumer: Creed rocks. The band sold out Gund Arena in 48 minutes. What's its secret, you ask? Prayer, simple as that.

To this, we can certainly relate, as we've been praying for this band to go away since its odious debut. Let's face it: Mainstream rock is in a miserable state, and Creed's newest chart-topper, Weathered, isn't helping much. The album -- the band's first since bassist Brian Marshall got the boot -- sounds a little heavier ("Bullets") and a little lighter ("Lullaby"). The mimicry remains, but it manifests itself in different forms, like on the Doorsy track "Who's Got My Back," which comes complete with a Cherokee Indian prayer. The religious overtones are still there, but they're not as introspective as they are violent: "I'm just a freedom fighter. No remorse. Raging on in holy war," huffs frontman Scott Stapp on "Freedom Fighter." The album even manages to elicit a few unintentional laughs when Stapp, his sister Amy, and the Tallahassee Boys Choir implore the children to please, please "Don't Stop Dancing." Does anyone really dance to Creed songs? You can ponder such side-splitting notions Sunday at the Gund.