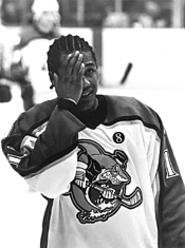 Walter Novak
Eric LaPlante knows the well-placed insult is "part of the game."
Invite a black guy to a hockey game, and you'll get hit with 100 volts of antipathy and distrust, as if you've invited him to a Klan rally. Even golf and tennis, once the province of guys with sweaters tied around their necks, have been embraced under the realm of Tiger and the Williams sisters. But to most of black America, hockey remains the cracker version of a traveling Disney revue -- Aryan Brotherhood on Ice.

It matters not that the game's racial barrier broke back in 1957, or that its honkification stems from simple geography. (Players tend to come from open-air meat lockers like Viking, Alberta; Warroad, Minnesota; Gothenburg, Sweden -- places not known for their Juneteenth celebrations.) Nor does it matter that the NHL's black ranks are rising, or that the league's leading scorer this season is black. To African Americans, it remains a game of roaming white guys badly in need of dental insurance.

Which leaves Eric LaPlante in a unique position. He's a black guy. He plays hockey for the Cleveland Barons.

Actually, this is unusual only in America, where friends chide talented black kids out of the game for playing a white man's sport. In Canada, a land less sphincterized, a young man can thrive. And so LaPlante did.

At age 16, he was sent from his home outside Montreal to Halifax, Nova Scotia, to play in the Quebec Major Junior League, akin to a prestigious prep school for hockey players. He proved the complete package: He could hit, fight, score when needed. And though he was eventually booted from Halifax in the middle of his second year for missing curfew -- "When you're young, you got to experience things," he says -- LaPlante was nonetheless chosen in the third round of the NHL draft.

There have been taunts, of course. "People in the crowd will scream, 'Go play basketball.' I get the n-word once in a while." But they've come infrequently, and LaPlante recounts them with a shrug.

He is, like most hockey players, as subdued off the ice as he is a mass of aggression on it. Though his look is thoroughly American -- double earrings, neck tattoo, baggy jeans, braids -- his personality is strictly Canadian. He speaks slowly, politely, with a deep French accent that cloaks his intelligence. The well-placed insult, he realizes, is just "part of the game."

This, after all, is a sport where people proudly wear nicknames like "The Rat" and "The Little Ball of Hate." Where there is need to have penalties for "spearing" and "boarding." Where one player just released from alcohol rehab was taunted with "have another beer." Where a coach once mocked a plump and meandering ref with "have another donut." Everybody takes shit. And the clashes, at least historically, have been ethnic rather than racial. Swedes took a beating when they entered the league, as did the Russians who followed. One owner refused to sign any commie bastard.

Employing the n-word is now cause for suspension, but everything else goes. French Canadians have long complained about being called "frogs," a considerable slur to those of French extract. But the league has done nothing. LaPlante doesn't mind. "You can sit right behind the bench and call me frog all night. I don't care."

That's because he dishes out far more than he takes. And he does it with particular flair. He is a skilled practitioner of trash talk. "You may know something personal about a guy, you talk about his sisters. Every time a guy skates by, you give him a line."

He is, in the lexicon of the trade, a grinder -- a man whose job is to dig the puck out of corners, hit, fight, play defense, serve as a bodyguard to the stars. Though it would seem a yeoman's craft, it is an exalted role in hockey. "Guys who score goals appreciate the grinders," says LaPlante. "You're like the officer out there. They respect you for protecting them."

LaPlante is small for a tough guy -- 6-foot-1, 190 pounds -- but he owns accomplished fists. After dispatching a foe, he's been known to circle the ice, hand cupped to ear, summoning louder applause. He is the Barons' resident showman, and his "little celebrations," as he calls them, are designed to piss people off.

"Sometimes you get in a fight because of it, and they hit you more. They come after you, they give you an elbow, they slash you, they give you two cross-checks instead of one." Result: penalty, bad guys. "The hard part is being patient and not retaliating."

There would seem easier ways to make a living. Last week, a large purple bruise showed from the bridge of LaPlante's nose. "I fought a guy with long fingernails," he smiles. But he understands his good fortune, what he calls "the life." It includes a handsome Warehouse District apartment, 40 grand a year, and a $100,000-plus signing bonus -- all to roam the Eastern Seaboard smashing into people. Not a bad gig for a 22-year-old with energy and testosterone to burn.

Besides, once they meet him, everybody loves a black hockey player, at least in Cleveland.

"People are surprised, like when I go to get my hair braided. But people show me a lot of love because it's a difficult sport, a tougher game."