Grant grows from a badly drawn Boy to a man in charming fashion. 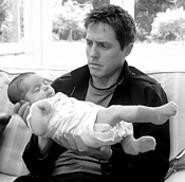 Will sizes up a future date.
It's appropriate that Universal would debut About a Boy against the latest installment in the Lucas juggernaut. Certainly it's daring, which is the last thing one ever expected to say about a film starring Hugh Grant. Consider: Clones is an enormous movie that signifies nothing outside of itself, as disposable as a broken action figure and about as valuable, while Boy is a small film that means a great deal, that reflects back on a portion of its audience who might feel adrift and alienated in a world where "island living" promises happy seclusion, but offers only loneliness and emotional retardation.

Will Freeman (Grant) lives on such an island, a North London apartment cluttered with the requisite recreational diversions -- DVDs, CDs, crap game shows, men's magazines, and cappuccino machines. Indeed, he's proud to say he is an island -- Ibiza, to be precise. He's trivial, useless, and proud of it -- a rich-boy slacker, living off the royalties of a wretched Christmas jingle ("Santa's Super Sleigh") penned by his one-hit wonder dad. He does nothing, wants for nothing, needs nothing . . . and is, in his own proud estimation, something of a nothing himself. "I didn't mean anything about anything to anyone," Will summarizes in voiceover, his voice full of hollow pride. To the couple who beg him to be godfather to their newborn girl, he's even more blunt, rejecting their invitation by insisting he'd likely shag her upon her 18th birthday. They're horrified, but he insists, "No, I am this shallow." God willing, he figures, he'll end up childless and alone. Such are the limitations of his imagination. He's a shadow, flitting through a world of real people who do real things and have real emotions.

Will's counterpart -- his doppelgänger, really -- is Marcus (Nicholas Hoult), the unhappy son of Fiona, a "daft fucking hippie" with suicidal tendencies played by Toni Collette, whose pale visage and red-rimmed eyes suggest she killed herself long ago. Twelve-year-old Marcus is as scruffy and uncool as Will is up-to-the-second hip; he sports thrift-store sweaters, a refugee's beat-up brown shoes, and the unkempt eyebrows of a demonic Damien. He's willing to suffer any indignation just to keep his mother from crying, and Hoult gives a rich, nuanced performance, looking throughout as though he's about to shout, smile, or both.

Will and Marcus cross paths -- accidentally, at first -- and the two help each other evolve. Theirs becomes less a friendship than a mentorship, only it's never clear who's tutoring whom. Will teaches Marcus there's more to life than his mother's penchant for singing Roberta Flack with her eyes closed; Marcus shows Will there's profound warmth and comfort to be taken from the company of others -- especially Rachel (Rachel Weisz), a single mother who initially believes there's depth to Will's kiddie pool. After bouts of contempt and wariness and ugly bitterness, boy teaches man and man reaches boy.

About a Boy, written and directed by American Pie's Chris and Paul Weitz, is the third cinematic adaptation of a Nick Hornby novel, and it's easily the best -- not because it's the closest to the source material (High Fidelity, despite being moved to Chicago, reads almost like the screenplay co-written by star John Cusack), but because it's more interested in the soul of the novel than the source itself. Will is still a closed-off prick -- his idea of the perfect date is the single mother who has so lowered her standards that a self-satisfied narcissist like Will becomes quite a good choice -- but his evolution feels organic and inevitable, more so than in the novel.

That has a good deal to do with Grant, speaking in a North London accent, who has never felt more substantial or real. His newly shorn hair reveals a slightly weary and aging countenance, and the self-absorbed glint in his eyes -- the one that did so much of his acting for him in Notting Hill and Four Weddings and a Funeral -- has dimmed slightly. Will is worn out from doing nothing, and Grant plays him like a man ashamed of himself, but too embarrassed to admit it or even do anything about it, until Marcus shows up on his doorstep one day after school and forces him to confront his worthlessness.

Perhaps the most remarkable aspect of About a Boy is how substantial it plays -- as a feel-good film with weight, a knowing comedy with dramatic depth. Its characters engage the audience so that you don't merely relate, but empathize, which is something most films don't bother to do these days. And the score, done entirely by Badly Drawn Boy, serves to further suck you in and underscore the emotion; Damon Gough manages to turn a suicide note into an ode to everlasting love. The commingling of music and narrative is, at times, almost overwhelming.

Fans of the novel might scoff at the feel-good ending -- the Weitzes do away with the bit about Kurt Cobain's death (the novel was set in 1993, and it wouldn't make sense 10 years on) and the arrest of Marcus's new would-be girlfriend. But it strikes the right chord nonetheless. Besides, modifications were necessary, as Hornby's novels tend to just end anyway, as though he'd decided to write to page 307 and stop there regardless. So skip Star Wars, this weekend at least; you know Anakin Skywalker grows up to become Darth Vader, but what will Marcus and Will become when they grow up? Us, probably.