One blow destroyed Todd Mey's life. A jury decided whether it would also destroy the cop who threw it. 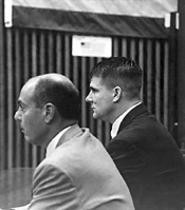 Walter Novak
Leon (left, with D'Angelo) rarely showed emotion during the weeklong trial.
Strained and nervous, Parma Policeman Dean Leon took the stand on the fourth day of his felonious assault trial. It would be his only chance to explain why he nearly killed 22-year-old Todd Mey outside the Jigsaw Saloon last August. Prosecutors had already trotted out five witnesses who saw Leon deliver a near-fatal punch to Mey. Spectators murmured that the cop's conviction was already in the bag.

The day before, Mey's mother testified that her son had emerged from an 11-day coma unable to recognize her or speak coherently. Even after months of therapy, he has difficulty making simple decisions and holding conversations. He can't hear from his right ear or read beyond a seventh-grade level. "It stopped his whole life," Vickie Mey said softly, tears in her eyes.

But Leon, 32, gave the jury no tears. He never showed a temper either, despite prosecutors' best attempts to goad him. On the stand, he was tense, volunteering nothing, smiling at nothing, only clenching and unclenching his jaw. He was every inch a police officer, but not nearly as sympathetic as Vickie Mey.

After prosecutors finished hurling their questions, Common Pleas Judge Peggy Foley Jones allowed one from a juror: Did Leon feel sorry for what happened to Mey?

It was a softball pitch, right down the middle, and a skilled speaker would have whacked it out of the park. But Leon was stiff. "I'm very sorry as to what happened to Todd," he said. "I wish it had never happened. I didn't intend for him to get severely hurt. I never meant for that to happen." It was the closest he came to an apology.

Leon's anxiety could be expected. His brother had been murdered just two years before. He'd been suspended from his job for nearly a year. He was facing up to eight years in prison and the end of his career. He couldn't deny that he punched Mey; his only hope was that the jury would accept his reasons for doing it. And even his attorney, Patrick D'Angelo, worried that his exhausted client might not have made the impression he needed.

Dean Leon got off work early on August 3, 2001. His girlfriend had just returned from a Miami vacation. They met at Leon's house around 1 a.m., took his Harley out for a spin, and decided to stop for a drink at the Jigsaw Saloon, a homey State Road tavern. The couple took a seat at the bar, ordered light beers and two shots of Jägermeister, and toasted the evening.

Mey was also at the Jigsaw, drinking with three friends. He'd never met Leon or his girlfriend before, but that didn't matter. As Mey's friend, David Pohlchuk, would later testify, "Todd likes to go around and mingle."

Mey approached Leon, telling the cop he was ugly. "That's how Todd is," Pohlchuk said, brushing off the insult as "no big deal." "He's very friendly."

Leon, understandably, didn't quite see it that way. He told Mey to get lost. Mey did, briefly, but then returned as the couple was doing a second round of shots, repeating the insult. The men exchanged words. Mey offered to shake his hand, but Leon refused. Mey backed away, made sure his friends were watching, and then charged Leon, tackling him.

The rest of the evening is fractured into a dozen different interpretations, but the basic facts are fairly clear: Mey and Leon tussled on the floor, while Mey's friends tried to pull them apart. Once the fight was broken up, Jigsaw owner Lairdy Lee asked Mey and his friends to leave. A few minutes later, when Leon went outside, he found the foursome lingering near the door.

Mey approached Leon, his hand extended. Leon swung and punched Mey in the head. (Leon says he was afraid Mey would attack him again; Mey's friends say Leon stormed out to settle the score.) Mey fell. His head smashed into the sidewalk. He was out cold. Lee reported that Leon then punched one of Mey's friends, blackening his eye, though Leon claimed he threw the punch in the melee inside.

At the time, Leon had been a Parma cop since 1995 without disciplinary trouble. He was proud of his profession. He put his badge number on his Harley's license plate, and he liked his uniform enough to wear it in his driver's license photo. Such pride was a family tradition: Father Duane is a retired Cleveland lieutenant; brother Wayne was a decorated Cleveland cop who was shot and killed while making a traffic stop two years ago.

But Leon's behavior that night was not textbook police conduct -- a fact prosecutors Christopher Keim and Kristine Travaglini hammered away at. While Mey lay unconscious on the sidewalk, gurgling blood, Leon called police to announce he'd been attacked by three men and that he didn't need an ambulance.

When the first Parma patrolman arrived on the scene, some bar patrons were shocked that he conferred with Leon instead of assisting Mey. "All of us were yelling at him, 'Can you help us do something? Aren't you going to help him?'" recalled Gwendolyn Jackson, who had been celebrating her fiancé's birthday at the saloon. "The policeman talked to him for all of a minute, and then [Leon] got on his motorcycle and rode off."

Leon and his girlfriend filled out their police reports at home, while Mey was helicoptered to MetroHealth. "He didn't use his authority and power as a police officer when he could have," Travaglini told the jury, suggesting Leon could have arrested Mey or called for backup if he was frightened. "He didn't use it until he needed it -- when he concocted his story."

The next day, as Mey hovered between life and death, Leon played softball in a police tournament. Only after the day's play, and after learning of Mey's condition, did he go to the hospital to document his bruises.

Prosecutors tried to paint Mey as the good guy: a jokester who jokingly started a fight inside the bar, but was sincerely trying to make amends outside. "Todd tried to be a gentleman," Travaglini said.

Jurors saw it differently. After almost a full day of deliberations, they returned verdicts of not guilty to charges of assault and felonious assault.

Leon's family seemed stunned. Duane Leon and D'Angelo fell into each other's arms, crying. Dean Leon, stoic during the trial, burst into tears and was swept from the courtroom in a mob of fellow police officers. (Leon declined comment.)

Few observers had predicted acquittal. Vickie Mey's testimony was heartbreaking. Jigsaw patrons and staff had described Leon as confronting Mey aggressively outside the bar; the only people present during the fight who testified for the defense were Leon and his girlfriend. Even D'Angelo, who firmly believed in his client's innocence, admits the case was an uphill battle. He was forced to focus on how much Mey drank that night -- anywhere from 7 to 15 beers over five hours, according to an expert witness -- and note that Mey was a "punk rocker" who played in a local band.

"We believed we had a very strong case," says County Prosecutor William D. Mason. "We had the sense that everything went as well as it could have gone for us. We were definitely very shocked by the verdict."

But every day, Leon's family filled the courtroom. His father, brother, and aunt were often joined by his brother Wayne's widow, Grace, recognizable to many because of her husband's tragic murder. While D'Angelo never made a point of their presence, the family was clearly suffering through every witness. And, as Mason points out, Leon's fellow police officers were also a daily presence. "That was a statement, too."

Perhaps more important, Mey's conduct inside the bar may have seemed inexcusable to jurors. Mey's friends could do little to explain why he would berate a perfect stranger. "Dean was just having a drink, minding his own business," D'Angelo says. "We wanted to put people back to that night. If they were sitting there and that happened to them, what would they have done?"

"I think that had a lot to do with it," says Leon's brother, Tony. "Everybody's at least seen a bar fight in their life. They can understand."

Mason believes the verdict was a case of "jury nullification," with jurors disregarding the evidence to reach the conclusion they wanted. It's a rare thing, he says. "I can't say the last time it happened here. But it does happen, and we accept it. We don't like it, but we accept it."

The incident lasted less than 10 minutes from Mey's tackle to Leon's punch. It took 10 months for the case to make its way to trial, three full days of testimony to explain those 10 minutes in court, and almost eight hours of deliberation for the jury to judge them.

The repercussions will likely continue much longer. Leon's return to the Parma Police Department is no more than a formality, says spokesman Bill Mauer, and he may even be eligible for back pay for his 10 months of unpaid leave. "He's a good police officer, and I expect he'll go back to being a good police officer," Mason says. But Leon still faces a possible civil suit from the Mey family. The family confirms that it is talking to an attorney.

And Mey's life will probably never return to normal. Before that August night, "He was working, playing guitar, planning a life, thinking about going to school," his mother says. "He was planning on moving out into his own place."

Today, those plans are out of the question. Now 23, Todd Mey can't comprehend what he reads. He gets dizzy. He can't remember simple words. Part of his face is still paralyzed, and he has hearing loss that no surgery can fix. Once outgoing, he's become quiet and easily angered. "Todd's not the same," Vickie Mey says.

D'Angelo says he has sympathy for Mey. But he firmly believes Mey's injuries were not Leon's fault. For that reason, Leon refused to plead guilty to a reduced charge, D'Angelo says. "He knew he couldn't live with himself if he did, because that's not what really happened. Everything Dean Leon worked for in his life was on the line."

Now, because of the jury's decision, at least one of the men who squared off that August night can return to his life.