A former judge says a reporter ruined his career. And he might be right. 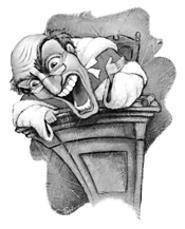 He's described as brash, bold, and colorful by his admirers. Petulant, egotistical, or simply an asshole by others. Even now, 18 months after leaving office, ex-Judge Robert Ferreri holds a prominent place in the memory of his former colleagues at Cuyahoga County Juvenile Court.

For 12 years, he was the ringmaster in a robe: part judge, part gadfly, all lightning rod. He ordered county workers to do community service when they disobeyed him. He threw the director of the detention center in jail when children escaped. He aroused such ire that a fellow judge once admitted a desire to put him through a wall. "He was one of those people," says a lawyer who worked with Ferreri. "You were either with him or against him."

Yet behind the combative veneer lay admirable intentions. He won accolades for his innovative attempts to help troubled kids. He impressed with his commitment and drive. "Whatever else you can say about him, juvenile court was the only place he wanted to be," says former court administrator John Zachariah. "You can't say that about every judge down there."

And by the mid-1990s, no county judge had a higher profile. The Plain Dealer heartily endorsed him. Cleveland magazine wrote a lengthy article. In 1994, he easily won reelection.

Six years later, however, Ferreri was out of office. In 1999 and again in 2000, the Ohio Supreme Court found he had violated the judicial code of conduct and suspended him from the bench. In November 2000, he lost his seat to little-known challenger Alison Nelson Floyd. The election wasn't close.

Such a breakneck demise is usually the product of profound arrogance or a first-degree felony. But Ferreri has another explanation. In a lawsuit that has crawled through the county courts for almost four years, he claims that in November 1996, Kate Lurie, then a reporter for WKYC-TV/ Channel 3, destroyed his career by revealing confidential remarks.

And now he wants her to pay.

Finally, by mid-1995, the mess was sorted through. The white couple, Tim and Cherie Burich, were given the nod to adopt both Shampail and her infant brother, Hastings.

But then Ferreri stepped in. On the eve of the adoption, he ordered that the black couple, Abdul and Mary Abdullah, be given permanent custody of both children, arguing the Abdullahs would provide the best home. "I made a determination, based on the evidence and based on the law, that I will live with the rest of my days," he said at the time. "My decision was in the best interest of the children." (Ferreri did not return several calls this month requesting comment.)

The matter lingered with the appeals court for another year before it was resolved. Finally, on November 21, 1996, a three-judge panel overturned Ferreri's late-inning intervention. The Buriches would get both children.

For nearly three years, the case had been a magnet for the media. Now it was over, and Ferreri was immediately solicited for interviews. Joseph Watson, a producer at Channel 3 who also happened to be Ferreri's neighbor, asked the judge if he'd be willing to talk. Ferreri agreed.

Lurie, a reporter and weekend anchor for the station, interviewed Ferreri in his living room that evening. She asked about the role of race in the custody battle, why Ferreri had ruled as he had, why he disagreed with the appeals court decision. Then, after 10 minutes, she removed his microphone and said she wanted to talk "off the record."

The ensuing four minutes of conversation would form the basis of litigation. Ferreri told Lurie that the wife of Avery Friedman -- the attorney who represented the Buriches -- worked for Appeals Court Judge Joseph Nahra and wrote the Shampail decision to favor her husband's clients. "I think there's going to be a scandal on this," he said.

It was a plausible, incriminating rumor. It was also complete bullshit. Friedman's wife hadn't worked for Nahra for several years.

As far as Ferreri's lawsuit is concerned, however, it doesn't matter. Unlike most suits against the media, which deal with defamation or libel, Ferreri is suing Lurie and Channel 3 for breach of contract and fraud. The argument is that the "off the record" designation was an agreement that promised him confidentiality. Once Lurie said those words, anything discussed was to be "privileged, sacred, to remain a secret always," Ferreri said in a deposition.

But to Lurie, going "off the record" simply meant Ferreri "could give me background information that would not be broadcast," according to an affidavit she filed in the case. The camera, after all, continued to roll the entire time.

The gulf between the definitions soon became apparent. Several days after interviewing Ferreri, Lurie called Friedman to ask him about the allegations, apparently making little effort to hide her source. Friedman asked Lurie for the unedited tape of the interview. Soon after, she gave it to him.

Lurie has stated that such a move is "not unusual," but most journalists would disagree. Al Tompkins, an instructor at the Poynter Institute, a media think tank, says that unedited tapes are essentially notes -- notes that contain unproven allegations and errors. Besides the risk of disseminating incorrect information, he says, handing over notes sets an inappropriate precedent for the reporter becoming an arm of law enforcement or a tool in civil lawsuits. "You don't want to encourage outside parties to witch-hunt our newsrooms, looking for stuff that may or may not exist."

Within days of receiving the tape, Friedman forwarded a transcript of the interview to the Supreme Court's office of disciplinary counsel. After Friedman's complaint became public, Lurie was out at Channel 3.

Meanwhile, Ferreri's downward spiral was getting started. His remarks to Lurie became part of the basis for a complaint the disciplinary counsel brought against him in August 1998. Ten months later, the Ohio Supreme Court suspended Ferreri's law license for six months. The following November, he failed in his bid for reelection.

Ferreri first filed the lawsuit in 1998; it was later voluntarily dismissed, then refiled in 2001. Attorneys for Lurie and Channel 3 have portrayed the suit as a frivolous exercise in ego maintenance -- Ferreri's attempt to blame someone for killing his own career. Whatever ethical lines Lurie crossed, her "off the record" doesn't amount to a contract under law, says WKYC attorney Steven Friedman (no relation to Avery). "It doesn't come close to any agreement that's enforceable under the law," he says.

A judge, however, may not find the case so easy to dismiss. In the last two decades, the courts have not been favorable to reporters who betray sources, says Lucy Daglish, executive director of the Reporters Committee for Freedom of the Press. "Just because you're a journalist, it doesn't excuse you from other generally applicable laws. If you made a promise to someone and that person relied on your promise, you can be held liable if something bad happens to them."

Still, there are a number of hurdles to clear before the case gets close to a jury. One is Ferreri himself, who has made comments on the record that have gotten him into trouble. Long before speaking to Lurie, in fact, Ferreri made disparaging remarks about Judge Peter Sikora and court personnel to the Call & Post and the Free Times -- remarks that make up two of the three counts in the disciplinary counsel's original case against him. Moreover, several of his comments to Lurie -- such as calling the appeals court decision "purely political" -- were not off the record.

There's also the matter of Ferreri's second suspension. Even while he was being investigated for the comments he made to Lurie, Ferreri was accused of once again violating the code of conduct, this time for conducting an improper meeting with a lawyer from the Department of Children and Family Services. After he served his first six-month suspension from the bench, the Supreme Court hit him with another six months for the second infraction.

No matter the odds against him, Ferreri is unlikely to give up on the case, say those who know him. If nothing else, it will allow the man with the ferocious legacy to question his tormentors, to broadcast the betrayal.

"At the very least," says an attorney who knows Ferreri well, "he'll make it interesting."