CMA's ode to experimental art is expertly captured on film. 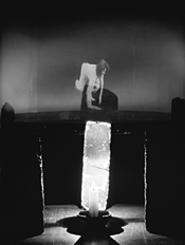 "Striding Crawling," hologram by Simone Forti.
The works in Into the Light: The Projected Image in American Art, 1964-1977 can hardly be said to suffer from overexposure. Although examples by well-known artists such as Andy Warhol and Bruce Nauman are included, these 16 films, videos, and installations are gathered together for the first time in this exhibition, now at the Cleveland Museum of Art. Many of these pieces have not been shown since they were made. Curated by Chrissie Iles of the Whitney Museum of American Art (from which this show originates), the exhibit reexamines the roots of cutting-edge contemporary art. More important, it argues successfully that these works should not merely be seen as experiments in a new artistic genre, but as important and complete in and of themselves.

The museum galleries have never looked like this. The walls are dark, lighting is limited mostly to that which comes from the artworks themselves, and the humming sound of film running through projectors is quite distinct. But experiencing these rooms is not like sitting in a plush, comfortable seat at a theater, watching an escapist movie.

Dennis Oppenheim's "Echo" involves 16mm film loops of the artist's hand slapping all four walls of the gallery. It's rudely confrontational. The effect of the loud ricocheting slaps can be read many ways. Is Oppenheim an artist trying to break free from the confines of the polite gallery/art museum to the raw life that lies beyond? Is he a generically rebellious type who is mad as hell and won't take it anymore? Or is he a composer of sorts, interested in making sound as physical as possible? Perhaps he is all three or none of the above. What is certain is that he is presenting those options without leading the viewer in one particular direction.

With some of the works, the viewer is asked to "perform." Simone Forti's "Striding Crawling" contains a holographic image of the artist dancing. This image, illuminated at the center by a candle, is activated only as the viewer moves around it. Pieces like this turn the tables on the conventional artist-viewer relationship: Without the viewer's participation, the works are incomplete.

Michael Snow's "Two Sides to Every Story" consists of a metal screen, each side of which has a continuous film loop projected on it. The viewer sees a woman walking stiffly between two people holding clapboards. Because her actions are filmed from both sides, we must switch back and forth in order to piece together the fragments of action. The allusions to theater and playacting here seem darkly humorous. The actors are filming a thankless script.

All the artists in this exhibition had an acute sensitivity to the possibilities of new technology. The pioneers of post-World War II American art -- intrepid individualists like Jackson Pollock -- were astronauts of inner space, who tapped into their own unconscious and brought back the art to prove it. The artists in Into the Light, though also interested in self-expression, did not stop at the self. They were interested in new technological developments and also drew inspiration from the cooler, more overtly cerebral art made by dadaists, such as Marcel Duchamp in the 1920s.

Warhol's film uses the technology of the split screen to tell a dark story about contemporary American culture. Edie Sedgwick (who would commit suicide shortly after this film was made) is shown acting out the last suicidal moments of 1940s Hollywood siren Lupe Velez. When Lupe (or is it Sedgwick?) takes a decisive turn for the worse, the film itself also seems to go haywire. The handheld camera jerks wildly in zigzagging movements. The use of mirrors and the resulting double images of the actress suggest that to merge fiction and reality is to court disaster. With the breakdown shown in this stagy, heavy-handed way, Warhol seems to be stating the obvious. But the film's meaning goes beyond that. Although it is ostensibly about Lupe, it also is about our complicity in her (and perhaps Sedgwick's) demise. In the darkened room at the museum, we feel like intruders in someone else's personal nightmare, until that clumsy handheld camera reminds us of a B movie.

Warhol's introduction of a brazen editorial touch into an otherwise straightforward documentary-style approach confirms its complexity. Perhaps Warhol is suggesting that Americans harbor a secret wish to see the Marilyn Monroes and the J.F.K.s of American life die as publicly as they have lived: in the spotlight, where every twitch of pain and discomfort can be scrutinized and commented upon.

The experimental works in Into the Light (as well as the companion exhibit of three video installations by multimedia artist Iñigo Manglano-Ovalle, on view at the Cleveland Center for Contemporary Art) consistently invite our creative participation. They engage the viewer on multiple levels: physical, mental, and emotional.

This is a visceral show as well as a thought-provoking one. The works heighten our awareness of perception, and in so doing, they make a form of sensory overload appealing.