When Sam Arendec goes medieval, he brings his trebuchet along. 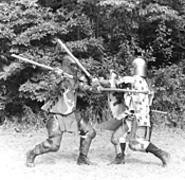 It's not a catapult, it's a trebuchet, explains Sam Arendec. Yeah, we know. We've been corrected by Arendec, his wife, and a representative of the Baycrafters Renaissance Fantasy Fayre, where Arendec will be showing off his trebuchet this weekend. And, Arendec says, if we talked to his eight-year-old son, he, too, would have set us straight. Apparently, there's a difference between one medieval hurling machine and another.

"The catapult uses a rope or spring wound up real tight," he says. "The trebuchet doesn't have that kind of tension. It has a counterweight that drops, kind of like an off-balance seesaw."

Arendec got the idea to build one of the primitive stone throwers a couple of years ago, while watching an episode of Nova. "My son said, 'You should make one of those,'" he explains. "I'm into the hands-on history. My brother and I used to hit each other with tomato sticks. I guess I never got over that."

The 16-foot device sits in the driveway of Arendec's Olmsted Falls home. Not so surprisingly, it's the topic of many neighborhood conversations. "I've got retired teachers living around me, so they actually think it's kinda neat," he says. "We put a wreath on top of it every year for Christmas."

Arendec admits that he's not much of a renaissance festival kinda guy (he rarely drags his trebuchet to these sorts of things, he says). Yet he'll probably be sporting armor of some sort at the 23rd annual Baycrafters gathering. "People launch cantaloupes at me, and I attempt to catch them on my head," he says.

Arendec will also be discharging foam rocks with his catapult -- er, trebuchet. No solid stones, though -- don't wanna hit Lady Lorna MacDonald, Conjurer Rodney the Elder, Mistress Jo, or any of the other folks strolling the grounds. "This is a good [place] for it," he says.

"There really aren't a lot of places where I can take this thing."