The sidewalks are the canvas at CMA's annual Chalk Fest. 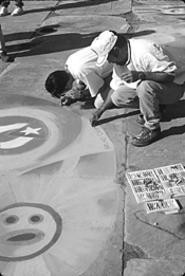 Artists craft their art at the Chalk Festival.
Rain and wind are not friends of sidewalk chalk artists. A gentle breeze can transform a footpath Rembrandt into an inadvertent Picasso.

If Mother Nature's kind, sidewalk art from both seasoned artists and first-timers will be seen Saturday and Sunday at the Cleveland Museum of Art's Chalk Festival. "We just work out in the open and keep our fingers crossed," explains CMA Artistic Director/chalk artist Robin VanLear, who estimates that it takes a couple of days to create one of her pieces.

The ideal chalk environment, VanLear says, is a windless "70-something-degree day." Still, VanLear appreciates the medium's temporary aspect. She likens chalk art to a bouquet of flowers: Just as flowers age at different times, chalk hues also can fade in varying degrees before a piece's completion. "You have this record of a passage of time," she says.

"It's not as intimidating as putting something on canvas," she admits, adding that it's easier for artists to take risks with chalk, because the work is not permanent.

Bruno Casiano, another local artist and Chalk Fest contributor, says the art's temporary quality instills an urgency to leave an impression. Because the piece will disappear "when the first rain comes around, you want to create it greater," he explains. "You have such a small period of time to make an impact."

Chalk Fest also affords these artists -- most of them accustomed to solitary studio work -- an interactive experience with the community. "People see the process at birth," says Casiano, who compares Chalk Fest to performance art, because bystanders witness the work from conception to finished product.

Casiano doesn't know what he'll be creating this year -- he won't know until he crouches down at the sidewalk slab. "I never preconceive anything," he says, perhaps in keeping with the art form's Renaissance roots, when beggars created random chalk pieces on Italy's streets.

The best thing about Chalk Fest, Casiano and VanLear agree, is the fact that amateurs and professionals alike can create their own masterworks. VanLear, who also teaches workshops at Chalk Fest, says that last year's two-day event drew approximately 2,000 chalkers.

"For me, it's fairly labor-intensive," she says. "Even though it's a temporary art form, I can't get away from being meticulous and detailed. It's the type of thing I only do a few times a year."

Too much chalk drawing, after all, can lead to work-related physical strain. "After a few days of being on your hands and knees," VanLear says, "your knees hurt, your back hurts, your butt hurts."

Ah, the agony of art.