Gore Verbinski and Naomi Watts throw their hats into The Ring. 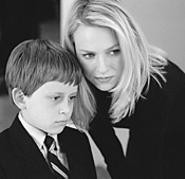 Much like a psychic, a cinema critic must look through a movie and see the other side. In the case of the new thriller The Ring -- remake of the 1998 Japanese hit, Ringu -- the formative forces swim into focus without effort. There's a Dreamworks boardroom, some executives exclaiming that Shrek can't be expected to pay all the bills, some heady talk of acquiring and retooling a foreign hit, plus some palpable annoyance that, stylistically, they don't control their own in-house M. Night Shyamalan (Signs) or David Fincher (Se7en) -- so they assign dependable director Gore Verbinski (The Mexican) to ape them. Heck, the cheapo Blair Witch Project made a mountain of money, and even a stink-bomb like Jeepers Creepers reached No. 1 at our nation's sometimes retarded box office -- so, they wonder, what's the secret of making post-goth eerieness go cha-ching?

Why -- the unfortunate bombast of The Haunting notwithstanding -- the secret is simply to find a functional formula and repeat it. Thus we receive this nonsensical yet satisfyingly sleek and suspenseful retelling of a grim tale about a disturbing videotape and the numskulls who doom themselves by watching it. (Insert Dorf on Golf joke here.) This Westernized, subtitle-free version comprises a pastiche of horror hooks, from pretty, petrified teens (lifted from any slasher epic or Don't Say a Word) to the standard creepy moppet (via The Shining and The Sixth Sense) to boob-tube bogeys (à la Videodrome and Poltergeist) to some good ol' family fun akin to that of V.C. Andrews (Flowers in the Attic). Basically, Verbinski and screenwriter Ehren Kruger embark willy-nilly on a scavenger hunt of scattershot spookouts, but if you completely bypass your brain and watch with only your eyes and nerves, you'll enjoy some good shrieks.

In an alternate Pacific Northwest, where horses commit suicide and yokel entrepreneurs drop rustic holiday cabins directly atop pits of unspeakable evil, we meet reporter Rachel Keller (Naomi Watts, sensational in Mulholland Drive, suitably chilled out here). Since Rachel's airhead teen cousin Katie (Amber Tamblyn) and three friends were slaughtered by a roaming, belch-like sound effect exactly one week after viewing an excruciatingly artsy, Kenneth Anger-style video, Rachel smells a scoop and views the tape herself. Um, hello? Immediately the telephone rings, and she is informed by a voice that sounds remarkably like Poltergeist's delightful Zelda Rubenstein that she has but seven days left to live.

Rachel is skeptical at first, and feisty -- when told by her editor at The Seattle Post-Intelligencer that she's fired, she replies, "No I'm not" -- but once her estranged man Noah (Martin Henderson, sleepwalking) and strange son Aidan (David Dorfman, better suited to comedy) view the accursed tape, lethal creepiness changes her tune. The three desperately chase clues toward an enigmatic little girl (Daveigh Chase, lead voice in Lilo & Stitch and the English dub of Spirited Away) in hope of unraveling her wicked mystery and saving themselves.

Those who have partaken of Hideo Nakata's Ringu -- a scary but increasingly scarce import -- will note that this remake parallels his story (based on Koji Suzuki's novel) while adding various bells and whistles. Originally slated to be shot near Boston, the project skedaddled to Seattle following the horror of 9-11, and the region's inherent gloom serves it very well. In addition, the effects are yuckier, the jolts intensified, the score (by wunderkind Hans Zimmer) is punched to a fever pitch, and the killer "ring" video itself -- deviously distributed earlier this year at comic book conventions -- is now more grotesque than the original.

Speaking of comic book conventions, the style of The Ring (and superb cinematography by Bojan Bozelli) has less to do with X-Files plundering (or the similarly themed Feardotcom) than with that awesome comic label Vertigo, best known for its highly stylized tales of madness and mayhem. Since the logic of the source material (and its worthy sequel, Ringu 2; franchise, anyone?) is iffy at best, Verbinski wisely concentrates on darkly sensuous imagery, which, apparently, was storyboarded very much in a pulpy comic vein.

Fortunately, The Ring also redeems its loopy plot with some killer concepts. In a gruff cameo, Brian Cox (Manhunter) rants, "What is it with you reporters? You take one person's tragedy and force the world to experience it, spread it like a sickness!" Said sickness grows more virulent with our heroine's conclusive discovery about her fate and the evil tape, in a denouement that hardly offers hope for humanity. Her dark revelation comes as a relief, for at last Dreamworks has given us the stuff of nightmare.