Danny Frye and the Devil Dolls prepare to Wang-chug their way across China. 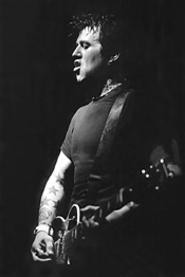 Walter Novak
Danny Frye leads the Devildolls' invasion of China.
Danny Frye is a towering 6-foot-3 rocker whose arms are colored by more ink than The Sunday New York Times. And so maybe it shouldn't be a surprise that he tends to freak out the occasional Chinese tourist.

"When I was mastering our record in Nashville, I was walking down the street, and this Chinese couple came up and wanted to take a picture of me," Frye recalls, before adopting an accent that makes him sound something like a drunken Mr. Mayagi from The Karate Kid. 'The guy was like 'Okay, smile, you looka like a big queer Elvis.' He took a picture and walked away."

One can only imagine, then, the kind of gawking in store for Frye when he and his band, the Devildolls, land in China for a 42-date trek that marks the debut of Cleveland rock in China -- one of the first Chinese tours ever by an underground American rock band. The jaunt, an AIDS-awareness tour sponsored by Durex condoms, kicks off in January.

But after hanging out on a recent Tuesday night at Frye's plush Seven Hills pad, where the spiky-haired crooner downs Natural Light with bassist Keith Ignition and guitarist David Lee Carpenter, we're not so sure that a country where public intoxication can carry a prison sentence is ready for these dudes.

"We do have this ritual. Before we go on, Keith does this great impression of Buffalo Bill from Silence of the Lambs," Carpenter explains to a round of guffaws. "Right before he puts his leather pants on, Keith drops trou, tucks his stuff, and does this Axl Rose dance while saying, 'It puts the lotion in the basket.'"

"It gets the hose again, doesn't it, Precious? Yes it does," Ignition chimes in on cue with a dead-on impersonation of said nutjob.

Despite the fact that they've all heard the routine a thousand times before, the band members laugh hysterically, doubled over for close to a full minute. It's about the only time they set down their brews.

The debauched air about Danny Frye and the Devildolls has made the band a strong live draw: Their shows boil over with infectious, drunken energy. The Devildolls do particularly well overseas, bringing in upwards of 400 people to their gigs. Indeed, it was on a successful run through the U.K. last winter that Frye met up with Mark Baxter, head of a British merchandise company, who was putting together a festival tour of China. Such an outing is almost unprecedented: Midlevel rock bands have never been allowed to tour the country, and Baxter was able to get the project off the ground only after throwing a smaller-scale rock fest the year before. It was in the midst of putting this year's fest together that Baxter caught Frye's act. He was so impressed with the lanky rocker that he offered him the first slot on the upcoming tour.

We'd imagine it would be somewhat frustrating for a band to kick such ass abroad, but struggle to bring in more than a hundred people at home. Frye says it's no problem. "I know the States are a much harder market to crack," he says. "If you tour Britain for a month, it's like the same size of Texas, so you can build up a huge following there. The hype in the States behind the Strokes isn't even half of the hype that they got in Britain. When I was on tour there the last time, they were on every building."

Frye and Co. are beginning to experience such hype firsthand -- albeit on a smaller scale. Frye's 2001 debut, Hellbent, an overheated take on rockabilly-inflected muscle-car rock, has gotten raves in Kerrang!, Rockpile, and Magnet. The group has seen its audiences double overseas, and even the white-hot Hives have contacted the Devildolls about getting copies of their latest, a split EP with Sweden's Gutter Queens. In the midst of the hoopla, China is the cherry on top.

"They're so starved for western civilization over there," Frye says with an eager grin, "and we're going to be there for six and a half weeks."

The real question is whether China will still be there when they're done.