A Riverdance hunk takes on Michael Flatley and other Irish clichés. 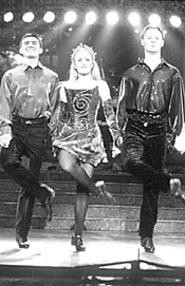 Apparently, Clevelanders can't get enough of Riverdance. The high-stepping PBS mainstay has come to town something like half a dozen times since its 1995 Dublin premiere. And it's returning Tuesday for 16 more performances.

By now, we all know the story of Bill Whelan's cultural celebration of Irish music and dancing. We all know of former lead dancer's Michael Flatley's exodus to form the rival Lord of the Dance. And we all know that "It's a high-energy show, and there's something for everyone," as current lead dancer Michael Patrick Gallagher says. But there are plenty of things we don't know about Riverdance. Things we've wanted to know for years, but never asked. Until now. Gallagher fills us in.

Does Michael Flatley really have Feet of Flames, as one of his touring shows claims?

Yeah, sure. I've never met the man, so I can't say. He was very good with Riverdance, but he should have retired a little earlier.

If you and Flatley had a dance showdown, who'd win?

If it was an ego contest, he'd have no problem [winning].

Do you ever wish you could dance to some U2 or Pogues?

Are all of the girls in Ireland that foxy?

Everyone in the troupe is so fit. They're always working out. And [traditional] costumes aren't as short as they are in the show.

You sport a pair of leather pants onstage.

Yeah, I do. But the leather is kinda stretchy, and the actual number that they're used in doesn't involve a lot of movement. If I were to try to dance one of the other numbers in those pants, it would be quite difficult.

I didn't have a proper Guinness until this past summer, when I went to the brewery in Dublin. Before that, it was always from bars in the States. There's something wrong with that.