Too Fast for Love

With a white-hot major-label debut, the Donnas don't have time for Avril Lavigne -- or you. 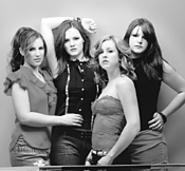 The Donnas: A little Joan Jett, a little Judas Priest.

You will never make out with one of the Donnas.

You have no chance.

And the Donnas intend to rub your nose in it. In an apparent attempt to surpass Amnesty International's standards for human torture, the Donnas have crafted Spend the Night, the band's major-label debut, which just happens to be a make-out concept album.

Your clothes are impeding our ability to make out ("Take It Off").

No way we're making out until you take a shower ("Dirty Denim").

Please share your drugs to facilitate our making out ("Pass It Around").

I didn't really want to make out with you anyway ("I Don't Care So There").

Your efforts to make out with me are rather transparent ("You Want to Get Me High").

Quit screwing around and make out with me already ("Please Don't Tease").

We feel comfortable stating that no band in history has penned as many songs about making out as the Donnas.

"Probably not, no," agrees singer Brett Anderson, a.k.a. Donna A. "Everybody writes about sex, like, all the time. That can get a little bit tiresome. But when you turn it around and pick a certain part that's your favorite, maybe you have something more to say."

Which the Donnas have been doing since they were still in training bras. Our story begins in junior high -- four outcast nerds-cum-heroines in Palo Alto, enamored with punk rock and heavy metal, dub themselves Ragedy Ann. Then, in 1997, a swarthy faux-Svengali named Darin Raffaelli teaches them rudimentary punk numbers and rechristens them the Donnas -- Donna A. on vocals, Donna C. (Torry Castellano) on drums, Donna R. (Allison Robertson) on guitar, and Donna F. (Maya Ford) on bass.

A self-titled debut CD emerges. It's cute, simplistic punk stuff, and the Magnet set bleats its approval -- it's an easy excuse for indie scenesters to gawk at babes playing unthreatening songs without feeling lecherous and corporate. But the Donnas have other ideas. They obsess over hair metal bands. Raunchy guitar solos. Cowbells. Judas Priest covers. Leather.

Raffaelli gets waylaid. The Donnas start cranking out their own material and cut three more records, each more brazenly arena-worthy than the last. They assert their femininity. On The Donnas Turn 21, they title a song "40 Boys in 40 Nights." They mock your blatant desire to woo them -- and your startling incompetence at doing so.

That pretty much brings us up to date.

"They're just so huge," Anderson explains. "Their productions are so big. It's just so big and so manly." She giggles. "I'd just like to be onstage at one of those concerts -- it would be so fun. And it's also fun for people watching, because they can live vicariously."

Taking its cue from their impeccably coiffed counterparts, the Donnas' live experience is most assuredly big and manly -- all the fun of a Poison show, without the pyrotechnics and STDs. The Donnas carry themselves like rock divas from hell; unfortunately, some fans live a bit too vicariously as a result. The best Donnas song remains "Are You Gonna Move It for Me?," in which Anderson admonishes geriatric critics who ridicule the band in print and then sidle off to a show to drool all over themselves and make unnerving gyrations.

Sample quote: "He wrote his number on his boxers/But he's three times my age."

"A lot," Anderson says. "A lot. That's why we play that song first -- it's like laying down the law. 'It's nothing new, you guys, we've seen this shit before, so don't think you're getting under our skin.' Then we can play the rest of our set, and we don't have to worry."

Obviously, fazing a Donna is difficult. Anderson isn't particularly impressed that Spin just called the Donnas "the coolest band in America" ("I think they said 'possibly'"), and she's very clear on how that happened ("We've just been really lucky"), and whether the Donnas will use this power for purposes of good or evil ("Good for us, and evil for some people on our album").

Ah, yes, Spend the Night. Three-minute power-chord ditties with huge, beer-shotgunning choruses that get off, even if you don't. "Take It Off," "You Want to Get Me High," and "Pass It Around," in particular, are world-destroyers. It's all enough to score the Donnas a bonanza of positive press; many folks are describing this as the band's debutante party, finally free of that metalhead sex-kitten shtick. Donna R. is married, everyone's 23, time to grow up and move on. Right?

Wrong. The "sleepover girls crowded on a bed" cover shot, giddy-cheerleader group vocals, and general air of adolescent lyrical insouciance ("You were hot till you took off your shirt") assure us that the Donnas are still operating in jailbait mode. They wear it well, but in a dark era wherein Rolling Stone builds a "Women in Rock" issue around such luminaries as Britney Spears, Shakira, and Avril Lavigne, the world could use a troupe of fully empowered, whip-smart high priestesses.

"I think [Rolling Stone] is trying to be nice, but they're failing miserably," Anderson says. "They're trying to be forward and everything, and I know where they're coming from, but these are not really women, and it's not really rock. It's, like, girls, and it's pop."

Call the Donnas either "girls" or "pop," and they'll beat you like a gong, chump.