After decades of gospel singing, the Blind Boys of Alabama are reaping God's blessings. 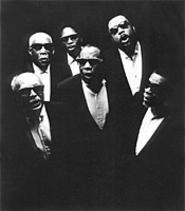 Resisting temptation for 70-plus years: The Blind Boys of Alabama.

Clarence Fountain loves the Lord. The founding member and leader of gospel legends the Blind Boys of Alabama loves being dipped in the river of Jordan, loves being left to feel like a motherless child, and even loves being swung at by a chariot. Recently, though, he had to open his heart to being covered in leaves by Jesus, a task that initially proved difficult.

"There were some words I was introduced to on this record that I didn't understand," Fountain says from Baton Rouge in his soothingly scratchy Southern drawl. The Blind Boys' latest effort, Spirit of the Century, contains the group's gospel interpretations of songs written by artists such as the Rolling Stones, Ben Harper, and Tom Waits. "'Jesus'll be here/He gonna cover us up with leaves'-- I didn't understand that," Fountain says, speaking of Waits's "Jesus Gonna Be Here."

"I was used to religious words and words that made sense to me." So Fountain and his colleagues sat down and painstakingly interpreted Waits's intentions, and they concluded that they were gentle and righteous -- just like Jesus Himself. "It came out good," he says with satisfaction. "Real good."

Fountain is used to feeling and interpreting his way through life, taking time to survey and process things. This comes not only from being blind, but growing up poor and black in Selma, Alabama. The son of a farmer and bootlegger, he lost his vision at the age of two and in the 1930s entered the Talladega Institute for the Blind. Although the school was open to blacks, they were taught separately and often went hungry. "It was like a prison," Blind Boy George Scott once told the magazine No Depression.

But the school did have a chorus, which spent most of its time practicing classical pieces to be sung once a year for the governor. "That's all they really wanted you to do," Fountain recalls. "So we got smart, sneaked off, and went out and made ourselves a little money. It wasn't hard to do -- they had a soldier camp about two miles down the road, and that was good, because they got paid every month." It was in these evening escapades that the group's members sharpened their skills, at first emulating their heroes in the Golden Gate Quartet, but eventually taking that group's "jubilee" style and morphing it into what came to be known as "hard gospel," a rawer sound that typifies what most people associate with old black gospel. The Blind Boys of Alabama became vocal powerhouses, full of strong harmonies that carried their resounding message of redemption and grace.

The group's career has included a performance for Franklin Roosevelt's 1941 inauguration, a friendly rivalry with Archie Brownlee's Blind Boys of Mississippi, temptations from the devil to go secular, and even the accidental shooting death of one of its members, Velma Taylor. "It was a thing I've never understood," Fountain says. "And I don't really try, because that's God's work, and He does things in His own way. But Velma was always talking about guns, that day especially. He heard that this guy had a gun, and he just couldn't wait. Then the gun went off. We don't know how it happened; it was an automatic, and he thought he took all the bullets out, but he left one in the chamber."

Were Taylor still around today, he, too, could be enjoying the bounty the Lord has offered up to His patient believers. As Fountain sees it, he made a deal with God a long time ago -- to sing only gospel, not give in to the rock and roll phenomenon that swept away so many of his contemporaries. Now he's seeing the fruit of his pact: Spirit of the Century is a best-seller, combining the musicianship of David Lindley, Charlie Musselwhite, John Hammond, and Richard Thompson's rhythm section with the sanctified harmonies of the Blind Boys. The group's vocals -- a bit weathered and sweet, unlike their booming stage presence of yore -- weave in and out of acoustic guitar and light percussion on most of the cuts. "Amazing Grace" is sung, ironically enough, to the theme of that classic ode to a whorehouse, "The House of the Rising Sun." Ben Harper's "Give a Man a Home" is gently rocked by David Lindley's electric slide and the tender harmonies of the Blind Boys backing up Fountain's lead. Not surprisingly, the same audiences that embraced O Brother, Where Art Thou? and The Buena Vista Social Club snapped up Spirit of the Century like snakes at a Pentecostal revival.

"I never would have sung rock and roll," says Fountain. "I had a chance to do it. Me and Sam Cooke was in the studio when a man gave Sam a contract to go rock and roll. I was there, and he gave me a chance if I wanted to. But I promised the Lord that I wasn't gonna do that, and He's blessing me now more than ever. When you make the Lord a promise, you don't go back on it."

It's Fountain's sincerity that now draws contemporary listeners to the Blind Boys' music, which exudes authentic truth against the fabricated backdrop of the music industry. It's for these same reasons that some gospel purists dislike Spirit of the Century, seeing it as yet another example of a collaborative project thrown together to make yuppies feel hip by finding some old-timers, backing them with contemporary musicians, and adding some electronic smoothness. Although the resulting recording is undeniably one that middle-aged Westlake-dwellers can play for their mainstream-eschewing pals during dinner parties, no one can deny that the group's somber connection to God bubbles up in the tracks. It is a truthful recording, and therefore more worthwhile than most recent collaborative efforts between seemingly disparate artists.

As for Clarence Fountain, well, he's just glad that someone like Peter Gabriel was willing to put out the record on his RealWorld label and take the band on tour. "The Lord has blessed us," Fountain says, comfortable in the knowledge that his patience has kept him in good stead -- unlike Sam Cooke, the irony of whose tragic death doesn't escape him.

The septuagenarian Fountain says he is more than prepared for his own parting. "I think God has a place prepared for us to go and wait until judgment comes," he says. "I got an idea that heaven is fine, and you don't have to worry 'bout nothin'. Everything'll be just good and will go on forever and ever. If you just hold on, everything be all right."