The Sound of Violence

How Black Dice's pain, passion, and noise came from Providence. 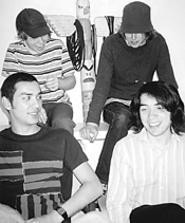 Snap your fingers, snap your neck: The Black Dice bring a lethal groove.

In the late '90s, the Black Dice were in the middle of a show in Minnesota when an angry mob emerged from the crowd and proceeded to beat the shit out of the band's members.

"We basically got beat up by a bunch of people while we were playing," says guitarist Bjorn Copeland over the phone from Brooklyn. "They also slashed the tires on our van.

"It certainly wasn't provoked," he goes on to explain. "But a lot of times, I think people hear things word of mouth or read things about people or bands, and it's easy to formulate your opinions, maybe incorrectly, based on the stuff you hear. I think a lot of the time, people have their minds made up about us well in advance, before ever seeing us."

Hence the mob of skinheads waiting in Minnesota who, Copeland speculates, had heard about this "crazy band" acting all hard and decided to stage an impromptu tough-guy contest with the four emaciated band members.

But you almost couldn't blame the Oi boys for getting the wrong idea. As part of Providence, Rhode Island's burgeoning noisecore movement of the late '90s, the Black Dice earned a reputation as one of the most violent acts around.

In its early days, a typical set lasted less than 15 minutes and consisted of the band members playing a little game of prison riot while screaming, thrashing, and tossing whatever they could. Word about the spastic early shows spread quickly, and before long the music press was writing accounts that read like war correspondences. Here's one from Jesse Ashlock at Epitonic.com: "The band's startling mix of earsplitting sonic chaos and audience intimidation can be so traumatizing to those who attend their shows unprepared that it can lead to their institutionalization."

However, what was ignored most of the time were two things: 1) Most of the injuries at Black Dice shows were sustained by the band members themselves, and 2) They were creating some pretty mind-blowing music -- and not just revised hardcore or punk, but a kind of visionary psychedelic noise.

The early material, played by three art school students and a high school senior, ignored the conventions of a style of music (punk) that itself was born in defiance of convention: It was aggressive but not directed at anything (like, say, the establishment); it was chaotic yet distinctly formal; it was angry, but also playful. Many failed to notice this, since most were expecting a bunch of pugnacious, Tourette's-stricken punks.

And so, for its first few years, the Black Dice enjoyed moderate underground success based on the extreme-sports appeal of their live performances. Even as those sets quadrupled in length and became more meditative, many fans and pundits still associated the band with violence.

But thanks to the release of their first full-length, Beaches & Canyons, the Black Dice seem poised to squash all misconceptions once and for all. A 60-minute collage of electronic and acoustic sounds, the record is glacial in both pacing and force, and functions like a pair of 3-D glasses that you can use to look back at their old material. With those glasses on, it's easy to see that these transcendent ideas were actually the driving forces for the Black Dice from day one.

In 1996, guitarist Bjorn Copeland, drummer Hisham Bharoocha, and bassist Sebastian Blank met at the Rhode Island School of Design and began writing material under the name Black Dice. Copeland's brother Eric joined the group soon after its inception and commuted regularly from Maine, where he was still finishing high school.

At that time, bands like Lightning Bolt and Arab on Radar had already put Providence's thriving noisecore scene through boot camp with their confrontational live shows. Now it was up to the Black Dice to pick those scabs and draw fresh blood. The band's sets were designed as short bursts of pulsing industrial noise. Objects were thrown (rumors speak of chunks of metal and broken glass), and band members were wounded regularly. What's more, the band never played the same set twice.

"I think a lot of it had to do with the ideas of commanding attention and control over a space," says Copeland. "I know we were all interested in how that changes the role that the audience plays in the performance." Aha! There it is: Did you hear it in his voice? That art-student speak?

Actually, don't get the wrong idea: Copeland is more of a gentle stoner than an art snob, but that special awareness one learns in art school -- that a work should function on multiple levels, that an artist's intentions are undeniably relevant and must be considered -- have always lingered in his remarks.

"There's definitely a lot of critical thought that goes into the music and the presentation," Copeland explains, "but we try to make the live presentation of it enjoyable."

These days, at their live shows, the Black Dice create sweeping compositions that function as aural metaphors for the most primal experiences, like pain and passion and death.

Among the sound sources used are drums, percussion, processed vocals, guitars with various effects, electronic tamboura (whatever that is), and tape machines with different loops running through processors and effects boxes. Copeland points out that at any given time, there are about seven different delays going simultaneously. The rhythms are mostly Eastern, and they are more like clouds than thunder. Melodies helix around one another like paint in a Jackson Pollock -- with each listen, different patterns jump out at you at different times.

But whether the musicians were kicking the shit out of each other as fast as they could or creating sound sculptures that unfold over the course of an hour, the Black Dice have never been about retracing other people's steps. After six years in which the band has never played the same set twice, it's even avoided retracing its own.