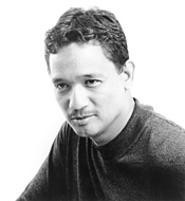 D.D. Jackson
Combining the drama and technical prowess of a distinguished classical artist with the improvisational grace of a dyed-in-the-wool jazz man, pianist D.D. Jackson speaks with intelligence and authority in a style that can be both delicate and frenetic.

A graduate of Indiana University with a master's in music, Jackson started playing piano at about six years of age. But even though his classical studies took him down a more traditional route at first, "I was always more of an improviser underneath, because I was making up ideas and melodies, and doing things largely by ear," Jackson says during a recent phone conversation from his home in New York.

That inclination for improvising eventually led Jackson toward other pastures. "I never really thought of myself as a jazz musician per se, because I was listening to so many things, like Stevie Wonder, pop recordings, and a whole lot of classical stuff," he explains.

Jackson's journeys down a variety of stylistic avenues imbue each of his recordings. He's composed a jazz opera, performed solo recitals, and jammed with a fusion-tinged electric combo, which was heard on his RCA release Anthem. Currently on tour to support his most recent disc, Sigamé, Jackson can be heard exploring what jazz great Jelly Roll Morton referred to as "that Spanish tinge," while adding his own signature touch.