Like a good highway pileup, the new Guns N' Roses is too awful to avoid. 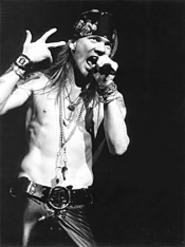 Axl Rose: His voice may be shot, but he's still lookin' great!

As Guns N' Roses' first American tour in nine years approaches Cleveland, we'll admit to feeling a little dirty. Like a freak who's aroused by auto accidents, we can't wait to see what is sure to be a fabulous disaster, the rock and roll equivalent of a 20-car pileup during rush hour.

Yeah, we all know by now that Axl Rose is nutty as chipmunk dung. This is the guy who unexpectedly turned into a headbanging Howard Hughes, sequestering himself for seven years, recording and rerecording the follow-up to Guns N' Roses' Use Your Illusion albums; barred former bandmates from entering the venue where GN'R's new lineup played; and, in perhaps his most telling sign of madness, got cornrows at age 40.

Now he's come back to reclaim all of Guns N' Roses' past glory with a guitarist who wears a chicken bucket on his head and the elderly, former boozehound bassist of the Replacements, whose liver is the size of Rose's ego.

Needless to say, many folks are less than convinced.

"I'd pay 25 or 30 bux for a ticket, but 55?" reads a post on cleveland.com from someone named Hydra. "For the original band, hell yeah. But just Axl and a bunch of unknowns, no sale!"

Nevertheless, our enthusiasm remains unchecked, even though the tour is bombing.

Of course, there was the riot in Vancouver, after the very first show of the tour was canceled. Blame for that one is still being debated. "The plug got pulled on us," Rose told Seattle's KISW-FM the morning after. "We were fully able to meet our commitments, and we don't really understand what happened."

Rose insists that he was set to make the gig. His people say mechanical problems with the plane delayed his departure from L.A. to Vancouver, and that the rocker was on his way to the show when it was suddenly halted. By his own admission, though, Rose wasn't even in town when opening band CKY was set to take the stage at 7:30 p.m. Pacific time -- less than two hours before GN'R was to perform. So it's hard not to empathize with the concert's beleaguered promoter. Or the folks who got their teeth bashed in by cops in all the commotion afterward.

Things didn't get any better the next night. Rose reportedly blew his voice out singing in the cavernous, half-empty Tacoma Dome. Anyone who saw Rose perform at this year's MTV Video Music Awards knows that his voice isn't exactly in tip-top shape to begin with, so this was bad news to say the least. Reviews of the band's next stop, in Nampa, Idaho, where GN'R drew a mere 4,400 people, suggested that Rose's pipes are indeed shot.

But if Rose's abilities aren't what they used to be, not everything has changed: At the Idaho gig, he made fans wait an excruciatingly long time before blessing them with his presence: Folks milled about for more than an hour between the second act on the bill -- the horribly out-of-place DJ Mixmaster Mike -- and the appearance of GN'R.

Mark our words: By the end of the tour, people will be twiddling their thumbs for two-plus hours.

But hey, the news ain't all bad. Word is, the few new songs that GN'R is premiering are pretty smokin.' And even though the new lineup will be short on familiar faces -- or any face at all, in the case of the mask-wearing Buckethead -- there's no denying the talent of this bunch. We'll take former Godflesh/Primus drummer Brian "Brain" Mantia over Matt Sorum any day. Mantia's funkier and more technically proficient; he hits harder, too. Likewise, bassist Tommy Stinson is a more-than-capable stand-in for Duff McKagan. We'll miss Slash, for sure, but Buckethead can truly rip, and with Robin Finck and Robert Fortus, they make a pretty formidable guitar threesome. We could do without the two keyboardists, but there's little doubt that this bunch ought to give classic GN'R numbers a kick in the arse.

Ah, listen to us rationalize. The truth is, we're going to the show because the promise of so much wreckage is too much for us to pass by without copping a look. We know it's going to be a mess, but what can we say? Somebody's gotta sate our appetite for destruction.