Guns N' Roses fire off a show that shuts up the doubting critics. 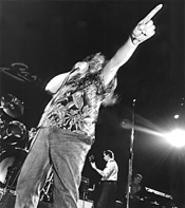 "The only wreckage I saw at the Guns N' Roses concert on Sunday was your article falling to pieces!" That was just the first letter critiquing our recent column, which took down the new GN'R lineup. "You should print an apology for your article because the show kicked ass and Axl's voice was amazing," went the next of several. Alrighty then, let us take this moment to admit that the band's recent show at the Gund wasn't nearly so awful as we anticipated. It was pretty good, in fact.

Sure, some of the problems that have plagued this tour from the onset dogged the Cleveland stop as well. Attendance was less than stellar, with only about two-thirds of the arena filled, and Axl Rose struggled with his vocals from the get-go. But after a rough start with "Welcome to the Jungle," Rose turned in a solid performance, demonstrating that he could still hit the high notes and that his pipes haven't deteriorated to the extent that early reviews have suggested. He did often sound winded from his incessant bounding about the stage and trademark hipshake, but that can be remedied with a little more time on the treadmill.

As for the rest of the band, they missed their share of notes -- same as Axl -- but their energy compensated for any gaffes. Buckethead's playing was as explosive as the flashpots that were detonated intermittently, the towering Robin Finck rocked like a glam Frankenstein in a glittery silver suit, and the plaid-clad Tommy Stinson, with his garish get-up, could have passed for an honorary member of the Bosstones. The group stuck mostly to material off Appetite for Destruction, though the few new songs that were debuted sounded good -- especially the moody ballad "Madagascar." Through it all, Rose went through three costume changes -- rotating Buckeyes, Browns, and Indians jerseys -- and didn't say much, except to goof on some guy for acting like a journalist. Hey, after all our shit-talkin', our kind had it comin'.

Chimaira entered Cleveland's Spider Studios last week to begin work on its second disc for Roadrunner Records. In an interesting twist, the band has decided to forgo working with a big-name producer -- Godsmack knob-twiddler Mudrock produced last year's Pass Out of Existence -- in favor of Switched frontman Ben Schigel, who produced the band's "This Present Darkness" EP a few years back.

Capsule, one of the West Side's best night spots, is celebrating its first anniversary with two evenings of free food and entertainment this weekend. On Friday, DJ Mike Wille will spin old-school rhythm and funk, while the Dead Horse Gallery holds an after-party for a new exhibit featuring artists Eric Jensen and Laura D'Alessandro. The next night, our favorite oddballs, Brother Ant and Brother Ed from Uncle Scratch's Gospel Revival, will be hosting a night of drinking and depravity. Complimentary hors d'oeuvres will be served at both events.

Check out www.Uttertrash.net for a cool new local webzine that focuses primarily on Northeast Ohio punk, metal, and independent film. Thankfully, it fails to live up to its name.