Tuesday, December 17, at the Beachland Ballroom. 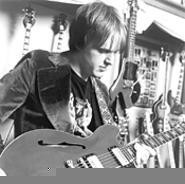 The title "child prodigy" has more often been a curse than a blessing. But guitarist extraordinaire Joe Bonamassa has managed to grow comfortably into that appellation -- even after being hailed by B.B. King as "a legend before his time" at age 12.

Now 25 and a grizzled veteran of the small-club circuit as former lead guitarist for Bloodline, the Utica, New York native recently released his second solo effort. Built on an unshakable foundation of hard-driving blues-rock guitar, So It's Like That proves Bonamassa has a knack for channeling his influences without succumbing to them. Jimi rears his head on "Pain and Sorrow," and Stevie Ray stands sentinel on the disc's title cut, but Bonamassa's riffs show originality, and his astounding chops are light years beyond reproach. Though his skills as a vocalist pale in comparison -- a dead giveaway to Bonamassa's youthfulness -- he knows how to push his own limits. Critics and fans are still waiting for the second coming of Stevie Ray Vaughan, and Bonamassa just might be the man for the job.