For modern rock without the sniveling, Erase the Grey's your band. 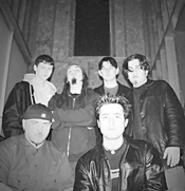 Erase the Grey has helped usher in one of the most fertile eras in Cleveland rock.

Jon Sayre seldom lives up to his nickname. For a guy known as "Freak" to fans and friends, Erase the Grey's frontman is disarmingly well-mannered. Sitting in his West Side home on a recent Tuesday night, Sayre excuses himself after saying "ass." He speaks of music with all the wide-eyed wonder of a teen caught up in his first crush. And -- though his band is sponsored by Jägermeister -- he offers a drink without partaking in one himself, explaining that he no longer indulges in the spirits. For a guy with a major label record deal, a crew of well-paid industry types out to make him a rock star, and a cool handle, Sayre seems more than a little out of character.

"We're like the Sprite of bands," the singer says with a chuckle. "Image is nothing. For real. We're just a bunch of average guys. We're happy as hell to have people listen to us."

Maybe so, but being happy as hell in hard rock these days is as career-imperiling as citing Trixter as an influence. Most of today's weepy rockers squeeze more mileage from their childhood miseries than from their tour buses.

Not that Erase the Grey is all puppies and peppermints. The band's recently released debut EP, "27 Days," contains its share of angst. But the melancholy is quickly eradicated by Erase the Grey's easy-going demeanor.

"So many bands are all negative," Sayre sighs, "but not every day is a bad one."

Especially when you're this bunch. The band -- rounded out by guitarists John Stepp and Jeff Dicken, drummer Josh Adkins, bassist Joshua Boyson, and sampler Nate Morgan -- was good enough from the get-go to attract A&R folks to its very first show. After hearing the group's demo, Monte Connor, head of Roadrunner Records, flew out to see Erase the Grey's live debut early this year, then promptly offered the band a deal.

"From there, it was just nuts," Sayre recalls, referring to the sudden influx of label interest. The group was flown to L.A. for a series of showcases. "That was the most frightening experience of my entire life. You get there, and there's two people -- A&R reps -- sitting there like this in front of you," he says, crossing his arms and screwing his face into a scowl that would make Bob Dole wince. "You do your thing, and they just sit there the whole time. You don't know what they're thinking or anything like that. But it all turned out pretty good, I guess."

Not only did Erase the Grey land a deal; the group has also helped usher in one of the most fertile periods in Cleveland rock. With Switched, Chimaira, Mushroomhead, and now Erase the Grey all gaining a national profile, eyes are turning to Northeast Ohio like seldom before.

"Now all of a sudden, you hear all the little A&R guys talking about Cleveland," Sayre says. "So many bands are getting looked at around here. It's great."

As he speaks, Sayre's emotions sometimes get the best of him. He's an excitable, almost overly sincere guy, and he doesn't attempt to hedge his feelings much -- which only makes him and his music all the more endearing.

Born in West Virginia, Sayre has a slight drawl, and the more wound up he gets, the more pronounced it becomes. He's especially enthused to recount the highlight of his band's trip to L.A.

It's telling that, of all the big names that Sayre rubbed elbows with out West -- Iggy Pop and the Red Hot Chili Peppers among them -- his brush with Jeremy thrills him the most. "Anybody who claims that they can't get laid" should take heed of the portly, hairy Jeremy, Sayre says. In other words, Jeremy is the kind of guy who can make just about anyone feel better about himself.

Sayre wants to similarly affect his audiences -- with pants on -- by making sure that his music is as much about hope as hard times. Sure, the guy has had his share of turmoil. When Sayre was growing up, money was always tight in his family, and he moved around so much that, by the time he finished high school, he had attended 13 different schools.

But rather than pick at old scabs as a catalyst for dark, detached music, Sayre does the opposite: He strives to connect with listeners -- to make people feel a little something, as sappy as that may seem.

"My favorite singer in the entire world is Marvin Gaye," he says. "That whole era. Billie Holiday and the likes of her. You can hear in the voices and instrumentation that there was just so much emotional involvement. They felt every word that they sang; they felt every drum hit. I just feel like music is starting to lose that, so I wanted to write something with some substance to it. To me, every song that comes from a band or a singer is a representation of that person. At least it should be.

"And I want people to look at us and know that we're true to what we do."

Listen to "27 Days," and you'll find it difficult to argue otherwise. Honest and hard-hitting, the disc is a combustible mix of dynamic modern rock, equally svelte and severe, with underpinnings of percolating electronics. The moody lead single, "Rain," could be enough to make Erase the Grey stars -- not that they would know what to do with themselves if it does.

"We're all really simple guys," Sayre says. "Give me enough to eat, let me sleep till noon, and I'll be happy the rest of my life. Seriously. Just let me play music."