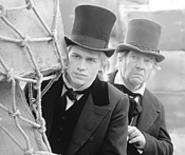 Those who seek a polar opposite to Michael Caine's kind-but-firm patriarch Dr. Wilbur Larch in The Cider House Rules will find it in Jim Broadbent's horrid, one-eyed headmaster, Wackford Squeers, in the new adaptation of Nicholas Nickleby. Author John Irving cribbed extensively from Charles Dickens to create his St. Cloud's orphanage, and now -- although it's obviously literary backtracking -- the same audiences who appreciated Cider House will enjoy writer-director Douglas McGrath's reverently Dickensian Nicholas. It's got all the flavor -- sad-lads, quest for family, earnest heroism, moral turpitude, colorful supporting characters -- at about a quarter of the calories; if you're after some family-friendly classic lit at the multiplex, here 'tis.

The usually benevolent Broadbent and Juliet Stevenson are perfectly sadistic as Mr. and Mrs. Squeers, teachers and torture-inflictors at the Yorkshire-based -- and disturbingly named -- Dotheboys Hall. Our young hero, Nicholas Nickleby (Charlie Hunnam), is dispatched to teach at the foul, abusive school after his father (Andrew Havill) dies, sending him, his mother (Stella Gonet), and his emotionally challenged sister Kate (Romola Garai) to London to beg career assistance from his tight-fisted uncle, Ralph Nickleby (Christopher Plummer). Mayhem ensues -- especially when Nicholas takes it upon himself to avenge the ravaged orphans against Mr. Squeers, lighting out with the particularly thrashed laddie Smike (Jamie Bell of Billy Elliot). Miraculously, McGrath (who last directed Emma) tidies up Dickens's copious subplots without losing his essence.

Just about the only problem with this Nicholas -- essentially a centenary edition; the book's first cinematic adaptation came in 1903 -- is that its lead is a pretty-boy liability. Posturing instead of acting, ditzy blond Hunnam (of Queer as Folk and Abandon) appears to be an extra or assistant gaffer who accidentally hit the jackpot. He stands on his marks, sports a foppish cravat, and says all his words in the right order, but otherwise he's a black hole in the middle of his own movie, a wooden Nickleby. The shame is that the rest of the film is very impressive. (Is it too late to replace him digitally?)

Playing with Dickens earns varying results -- from Henry Winkler in the cutesy modern-day television version of A Christmas Carol to Alec Guinness in Christine Edzard's six bludgeoning hours of Little Dorrit -- but, apart from casting slummy Hunnam (who makes Cider House-era Tobey Maguire seem like Olivier), McGrath has a strong handle on Nicholas. Take, for example, the flight of the hero and Smike to Liverpool, where they join a troupe of zany actors that includes Alan Cumming (talk about goddamned cutesy) and Eileen Walsh, plus both Barry Humphries and his alter-ego, Dame Edna (both queasy), under the leadership of Nathan Lane. A lesser director would have lost his way in the spectacle; McGrath reveals the glory of theater -- one of Dickens's true loves -- and hits a truly moving note, then economically shuttles us along.

All other performers are splendid. Plummer steals every frame he's in, a terrific Dickens villain and also a perfect counterbalance for his comparatively vanilla turn as a fatherly customs official in Ararat. As already noted, Broadbent is a blast, so mean he's funny, especially when muttering about his speciality of "capturing wayward boys" -- is this Yorkshire, or Neverland? Bell skillfully delivers the hopeful but terribly downtrodden Smike (imagine DiCaprio in What's Eating Gilbert Grape, only 10 times better), and Edward Fox turns up as what appears to be craggy, present-day Bob Dylan (but isn't). As Ralph's assistant, Newman Noggs, Tom Courtenay (a legend from Billy Liar onward) strikes chords of dignity and identity as vital as the main story, and Timothy Spall (All or Nothing), Anne Hathaway (The Princess Diaries), and British television star Gerard Horan round out a fine ensemble cast.

In terms of design and execution, this Nicholas is a beaut, with the gorgeous, percolating score of Rachel Portman (Cider House Rules again!) interlacing the bucolic charm of the Nickleby country manor, the horrors of Dotheboys, and the grit and grime of modernizing London. If Dickens were alive today, he'd probably be writing for Friends (freakish, but not implausible), since the foibles of his contemporaries most concerned him. Nicholas Nickleby was published in 1839, but McGrath and production designer Eve Stewart have pushed the story into the 1850s to capture the contrasts of the Industrial Revolution. The tasteful little revision works wonders, enhancing the cultural and economic subtext and bringing richer meaning to the story's morals. One imagines that the author would approve.