The food and service can't match the looks of Brecksville's Austin’s Grille. 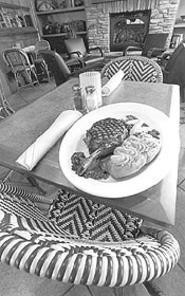 Walter Novak
The atmosphere at Austin's is perfectly suited for a big ol' Cowboy Steak.
If good looks were all it took to make a winning restaurant, Austin's Wood Fire Grille in Brecksville would be an undisputed champ. Owner Dan Campbell's new Texas-style steak-and-chop shop is that handsome, with a sophisticated rusticity that seems more suited to California wine country than to the trailing end of a suburban shopping plaza. There's also food and service to consider, though, and in those arenas, the ambitious new restaurant, open since late October, still has something to prove.

But first let's savor the good stuff. It's worth noting that not only is the Grille's Cal-contemporary decor a pleasant incongruity in snowy Northeast Ohio, it's also a marked contrast to Campbell's other restaurant, the slightly shabby and entirely unpretentious Austin's Smokin' Steakhouse in Mayfield Village. The Grille's appearance has everything the steakhouse lacks: space, style, and elegant appointments. Slate floors, a fieldstone fireplace, mahogany paneling, and faux-sandstone walls are embracingly earthy. Enticing aromas of hickory roasting and mesquite grilling pour out of the modern open kitchen, then drift across the granite-topped bar. Chubby terra-cotta floor urns hold sheaves of amber grasses and twisted willow branches, while plump cooks and servers prance across the walls in a series of joyful prints by Jennifer Garant and Guy Buffet. (Buffet's festive figures show up again on servers' neckties.) A golden ambient glow washes across tightly packed tables, booths, and banquettes, pierced here and there by light from lime-green, cherry-red, and lemon-yellow pendant lamps. Cherry wood-trimmed tables are gracefully set with creamy cloth napkins, gleaming oversized flatware, and petite oil lamps in fluted, frosted holders.

While Mayfield favorites such as succulent baby-back ribs, barbecued chicken, and Carolina crab cakes put in appearances on the Grille's big menu, don't look for chicken wings, brisket, or St. Louis-style ribs here. The choices are more urbane, befitting the dolled-up digs, with a wider assortment of steaks and seafood, and just a smattering of sandwiches and entrée-size salads. Rather than a Mayfield nosh like onion rings, for instance, Brecksville offers smoked duck pot stickers. Rather than the steakhouse's humble side dishes of mac 'n' cheese, cinnamon apples, or the beef- and bacon-spiked "smokin' beans," the new establishment features hoity-toity go-withs like garlic mashed potatoes, twice-baked potatoes, and tender-crisp asparagus spears. Of course, the more-refined focus means most Brecksville entrées are priced higher, at about $15 to $20, with several steaks edging up into the mid-$20s. To Campbell's credit, he has boosted prices only minimally, if at all, on items carried over from Mayfield.

Guests are greeted with a napkin-lined basket of warm Orlando breads (ciabatta buns, multigrain rolls, and slender rosemary breadsticks on our visits) and sweet butter served in a sleek black ramekin. A 59-bottle, mostly Californian wine list is printed on the back of the dinner menu, with choices ranging from a $16 bottle of white zin to an out-of-context $275 bottle of 1997 Château Lafite Rothschild. But there are plenty of good bottles in the $18 to $30 range, and by-the-glass pours, mostly pegged at $5 to $9, are a generous seven ounces.

Nearly a dozen more-or-less successful starters vie for diners' attention. One night's simple house salad ($3.99 à la carte, $2.49 with an entrée) was a pleasant if pedestrian toss of mixed lettuces, grape tomato, red onion rings, and croutons; freshly made garlic-lime dressing, sparked with crumbs of blue cheese, added zest. Cheesy Monte Cristo soup, with melted cheddar and Swiss, was the broth du jour on another visit. Satiny smooth and loaded with tender smoked turkey and ham, it tasted great, though it was thick enough to double as a rarebit. A serving of three slim Carolina crab cakes, seasoned with Old Bay, corn, and roasted red pepper and draped over a mound of julienned lettuce, were moist and delicate; while the cakes' texture was a bit too limp, dollops of chili-spiced mayo and juicy cilantro-and-red-pepper salsa infused the dish with sass. Finally, a starter of three buttery, blackened diver-caught scallops, slathered with a savory walnut-and-blue-cheese sauce and resting on a bed of lightly sautéed spinach, tangoed tastefully in the territory between the sweet, the sharp, and the smoky -- though one might argue that it's a shame to squander the delicacy of scallops beneath such an avalanche of bold seasonings.

While such a minor reservation is largely a question of taste, there was no justification for the gray, overcooked peapods in a side of mixed vegetables -- or worse, the mushy texture and fishy bouquet of a grilled swordfish filet. Yet other entrées -- a thick slab of fragrant, hickory-smoked prime rib served with peppery horseradish cream and rich jus, say, or a sizzling handcut rib steak (a.k.a. "Cowboy Steak") perfectly grilled over a mesquite fire -- were flawless. And a barely seared portion of yellowfin tuna, wrapped in a crunchy cloak of sesame seeds and black peppercorns, and served sashimi-style with pickled ginger and three sauces (wasabi, sesame-soy, and peanut), was mind-blowing: plusher than cashmere, impeccably fresh, and crackling with flavor.

In fact, if the service had been only half this impressive, Austin's would have left a far better taste in our mouth. Instead, our party encountered a 20-minute wait for a reserved table; long, unexplained lapses between courses; emptied plates and wine glasses that were never removed; and staffers who seemed to know next to nothing about the food they were dishing out. One, for instance, misidentified sesame-soy sauce as cranberry jelly. Really. And we overheard a manager scold a customer who balked at his (properly) rare yellowfin tuna by insisting that he must have mistakenly ordered ahi tuna and incorrectly asserting that "ahi" means raw. (Ahi is the Hawaiian term for yellowfin.) It's important to point out that most of these stumbles occurred on a Saturday night, when the restaurant was both jammed and understaffed; Campbell says he's committed to solving these problems.

Sweet endings include a homey collection of pies, crisps, puddings, and cakes, offered up in mammoth portions designed for sharing. While a slab of warm apple crisp, cuddled up against a snowball of vanilla-bean ice cream, would have profited from a longer stay in the oven (it's the topping that should be crisp, you know, not the fruit), a custardy bread pudding, bristling with plump raisins and soused with a well-balanced bourbon sauce, was just right. And a soufflé-like "sunken" chocolate cake finished with a scoop of coffee ice cream had a sophisticated, bittersweet flavor and the ephemeral texture of meringue. The kitchen might want to look into its coffee-making habits, though. On both of our visits, the bitter brew was tepid when poured, and the bottoms of our emptied cups sported a layer of sludge.

As any head-turner will tell you, it's often assumed (usually wrongly) that the beautiful people have it all -- brains, talent, and charm to spare. It's likely that guests of Austin's Wood Fire Grille will harbor the same kind of skewed sentiments about this restaurant: For better or worse, the place is so damn pretty, diners can't help but expect the food and service to be equally out of this world. The Grille's staff hasn't reached that level yet. It will be Campbell's challenge over the next few months to take it there.