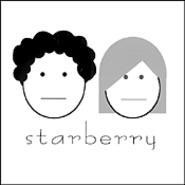 Starberry's homemade debut feels like a thrift-store sweater: tattered, well-worn, and missing a few buttons, but all the more endearing for its ragged charm. Recorded in the basement of Jennifer and Pat Casa's house and mixed in their kitchen, Starberry is low in fidelity and high in energy -- mostly, it's full-on power pop.

Frontwoman Jennifer counterpoises a honeyed yelp with rancorous guitar playing, augmented well by the drumming of husband Pat, who ups the muscle of Starberry's sound by pounding his kit to ribbons. Virtually any of the 12 cuts here could be singles -- particularly the jarring "Further In-Between," one of the album's most explosive, emotive cuts; "See You," which deftly cores the Apples in Stereo with its heavenward harmonies and spiky crunch; and "Gravity," an infectious, piano-laced number. Granted, scruffy rock duos -- particularly of the male-female variety -- are gaining play to the point of cliché, but Starberry brings enough to the table to drop one of the funner debuts of the year. Go on, take a bite.