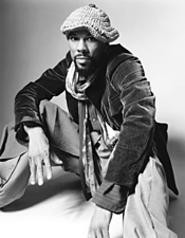 He's Electric: Common's new album may shock old fans.
You spend the better part of a decade clawing your way up from the hip-hop underground. You finally hit paydirt with a Top 10 album that positions you to really make some noise next time out. Then that next time comes . . . and you deliver a dense, guitar-heavy epic that has as much to do with Woodstock as rocking the block.

This is probably not a move your accountant would sign off on.

But for Common, that's a small concern these days. "I look at it like . . . everything is a progression," he says. "If I progress as a person or an artist, then I'm not messing up."

The change in Common has been a marked one. The Chicago MC, born Lonnie Lynn and first noticed in The Source's "Unsigned Hype" column, is no longer the judgmental rhymer who once called opponents "faggots" and believed fervently that hip-hop should stay true to its beats-and-rhymes roots.

His latest album, Electric Circus, paints a new portrait of the man: a reflective rhymer inspired by Pink Floyd and Stereolab, who's unafraid of revealing the color of his dreams ("Electric Wire Hustle Flower," in case you wondered) or admitting to the pain he's caused gay listeners. In short, the kind of stuff that usually gets you labeled "soft" in a heartbeat by hip-hop heads.

"I don't put no boundaries on hip-hop now," Common says. "But I couldn't talk people into liking a record. Either they dig it or they don't. Hearing the music is the only thing that can convince people."

Still, Common acknowledges the battle he faces in persuading his usual audience to come along for the ride. He's done tons of press promoting the album, which -- although it spawned a hit (the Mary J. Blige duet "Come Close") -- seems unlikely to match the success of Like Water for Chocolate, his gold-selling 2000 breakthrough.

"You gotta work extra hard, 'cause it's different," he admits. "But still, everybody's not gonna move where you move to. You might be at a different place. But that's in the name of art. It's up to the artist to express his or her art at that time."

For Common, Electric Circus started with the discovery of the rock music he'd largely ignored while growing up on Chicago's heavily black South Side. "Some of my producers would actually even sample the stuff. But I was never really listening to it for pleasure. I never gave it its chance, 'cause I didn't feel it was soulful, y'know? But then I got to hear Pink Floyd a little while back, and it was soulful. It had a real free spirit about it. See, I was lookin' for real free music when I made this album. Because we in hip-hop limit ourselves to what we create and listen to."

Common's beef with today's hip-hop goes back at least to 1994 and the song "I Used to Love H.E.R.," which lamented the music's focus on glitz, guns, and gangstas, and has become an anthem for anti-blingers. He admits his current experimentation has been sparked by those same concerns, but he adds, "Sometimes I really enjoy hip-hop. Hip-hop ain't necessarily gonna grow in the way I would like, but my way ain't necessarily the right way." Still, there's no hiding the pride when he states that "on this album, I dwelled in places I don't think hip-hop has been, nor black music."

One such place is revealed on "Between Me, You and Liberation," where Common speaks frankly about accepting a gay friend. The situation is hypothetical, but the sentiment is real, he says -- even though he adds that "I'm not really tryin' to say I'm sorry, but I wanted to show that I'd grown.

"My intention was never to bring anybody down. It was just MCin' shit," he says. "Where I'm from, 'faggot' is just a way to put down another MC. I didn't know cats was takin' it to heart so much. But I remember a woman came to me and said, 'My mom is gay. And I love your music, but I hate that you're so homophobic.'"

Electric Circus was overseen by Roots drummer ?uestlove, whose band dropped a similarly adventurous outing (Phrenology) at about the same time. Some listeners have credited (and, in a few cases, blamed) Common's new direction to his gal pal, Erykah Badu, who shows up on the nine-minute Hendrix-like freakout "Jimi Was a Rock Star." "Well, she inspires me, as creative as she is, and as free as she is. I love it," he says. "It ain't like I got people around me sayin', 'This ain't what niggas expect. You s'posed to do what niggas expect!' I'm not hearin' those comments. I'm hearin' 'Just be you!'"

And the supporters have more than made up for the naysayers. One important backer is Prince, who became a fan after hearing Common's 2000 hit "The Light"; he appears on the very purplish "Star 69 (With Love)." The Artist floored Common while the two were listening to the album. "He told me that if Miles Davis was alive, this is what his music would sound like," Common recalls with an amazed laugh. "So you know I was overwhelmed."

After experiencing Electric Circus, we know the feeling.