Six promising bands rip it up at the Revolution. 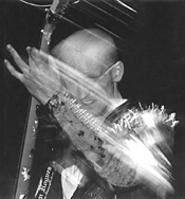 Walter Novak
The Brazen Rogues blazed away at the Hi-Fi Club last Friday.

The final-round artists of No Compromise Productions' first battle of the bands played better than they spell. With names like Jynxt and Xpectationz crowding the bill of the February 15 Revolution show, things looked pretty dubious on paper.

But the event proved to be a lively showcase of promising young acts, with top honors going to Elyria's Johnny Psycho, an exceptional rockabilly trio that impressed the audience with airtight songwriting and instrumental virtuosity that belied the players' youth. (And this wasn't their first taste of competitive success: The boys are past winners of the High School Rock Off.) Close behind were buoyant pop punkers S.O.C., a Damascus, Ohio outfit whose sturdy tunes and bubbly stage presence earned an exuberant response from the crowd. Second runner-up was Xpectationz, another melodic punk contender, with verve and wit to spare.

Other strong showings included the gutter punks in Jynxt; the anthemic, Smoking Popes-like No Pun Intended; and Parma's bruising Negative Receptive, which boasts one of the area's more dynamic metal singers.

For its victory, Johnny Psycho took home $400, while S.O.C. and Xpectationz each won 10 hours of free studio time and $100 and $50, respectively. No Compromise, a label/production company that specializes in punk and hardcore, plans to host more battles in the coming months.

The premiere Brave Words and Bloody Knuckles Six Pack Weekend, which kicks off in June at the Odeon, just got a lot heavier: In a major addition, the Fest has secured Swiss doom pioneers Candlemass and its gargantuan frontman, Messiah Marcolin (who's good for 300 pounds' worth of heaviness himself). Candlemass hasn't played the U.S. in more than 12 years, and the Cleveland fest is its only planned gig here this year. With such epic standards as "Bewitched" and "Mirror Mirror," Candlemass is arguably the finest doom band ever.

Chimaira has enlisted director Paul Brown (Jerry Cantrell, Murderdolls) to lens a video for "Down Again," the first single from the band's forthcoming The Impossibility of Reason, the release date for which has been bumped back to May 13. The band will shoot the clip in L.A. next month.

Legendary DJ Alan Freed, the very reason Cleveland is so preoccupied with its "birthplace of rock and roll" sloganeering, will be honored with an exhibit at the Rock and Roll Hall of Fame beginning Saturday, March 1. The exhibit, Alan Freed: King of the Moondoggers, will feature records, concert programs, documents on Freed's infamous payola scandal, and the reopening of the Rock Hall's renovated radio studio, now known as the Alan Freed Studio.