Relive the dangers of the Underground Railroad at Hale Farm's A Fugitive's Path. 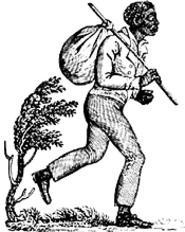 It's 1852 in the American South, and you've just been slapped on the auction block. Whips are cracking, insults are flying, and your will is breaking before you've even been bought. Welcome to your new life as a slave.

At Hale Farm & Village's weekend program A Fugitive's Path -- Escape on the Underground Railroad, understanding slaves' route to freedom begins with understanding life as a slave in the mid-19th century. Set on the grounds of Hale Farm, A Fugitive's Path places visitors in the role of slaves fleeing bondage. They tour fictional underground railroad sites around the museum, meet historical characters, and survive the perils of slavery.

"The initial scene -- the sale scene -- is really sobering for visitors," says Hale Farm historian Matt Lautzenheiser. The program is aimed at helping visitors understand the racial and ethnic diversity of Northeast Ohio during the mid-19th century. It also helps dispel many myths of the period -- romantic notions of secret passageways, maps made of quilts, and even the concept that crossing the Ohio River meant freedom.

"People always imagine secret passages and tunnels, and things like that," explains Mike Winter, director of education at Hale Farm. But "999 times out of 1,000, that's not the truth. Our program is very close to the truth. We've tried to re-create a real sense of the fear and hope people had when they were escaping."

Participants are bought and sold, forced to flee, hunted by slave catchers, hidden in barns, and traipsed through mud and snow in hopes of finding freedom.

"Some people come here and think it was a lot easier than it really was," says Leonard Goff, who plays a runaway slave. "By this happening [outdoors], they get some understanding of how hard it was for a slave -- a slave who probably walked from Kentucky to Cleveland. I mean they walked."

Here's a chance to do the same, in their shoes.