The Trolley's summer tours take you to all the best places. 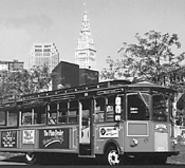 Lolly the Trolley's summer tours -- which start in the Flats and take riders downtown, to the East Side, and back -- pay visits to Cleveland's storied landmarks: the Rock Hall, West Side Market, and Playhouse Square. They run daily. Tickets are $10 and $15; call 216-771-4484. -- Cris Glaser

Real Men Cook -- where local celebrities, politicos, and sportsmen dish up their favorite eats -- has been raising money for the Women's Alliance for Recovery Services for 15 years. And the food served up isn't all what you'd expect. Sure, there's plenty of chili and BBQ, but there are also more refined eats, such as vegetarian entrées and heavenly sweets. More than 100 guys will participate this year, so bring your appetite. Real Men Cook takes place from 11:30 a.m. to 1:30 p.m. today at the Holiday Inn Select-City Centre Lakeshore (1111 Lakeside Avenue). Tickets are $9 and $10. Call 216-575-9120 for more information. -- Michael Gallucci

Men in tuxes and women in lamé gowns and stiletto heels -- that's the way the world should be, says Donald Shingler, host of the Cleveland Fashion Show, a dress-me-up-and-show-me-off gala designed to give downtown a shot of sophistication. "I wanted to make a night out that I would be proud of," Shingler says. Elegant, indeed: Shingler begs guests to wear gowns or suits they wouldn't wear anywhere else. "Women can be daring: Show some back, shoulder, or cleavage," he says.

The fashion show will feature new creations from Cleveland designers Ann van Hauwaert and Michael Wilson. The after-party features a DJ, dancing, and cash bar. "This is all about Cleveland's new and growing big-city lifestyle," Shingler says. "It's a night to see and be seen." The Cleveland Fashion Show starts at 9 tonight at the Club at Key Center, 127 Public Square. Admission ranges from $25 to $75; call 440-323-1262. -- Cris Glaser

Since 1972, conservationist Peter Forbes has prevented more than 1.4 million acres of U.S. land from becoming strip malls and parking lots. He may be best known locally for his efforts to turn the old Coliseum into part of the Cuyahoga Valley National Park. Forbes discusses his work at 7:30 tonight at the Cleveland Museum of Natural History (1 Wade Oval Drive). Admission is $6 and $8; call 216-231-1177 for more information. -- Michael Gallucci