The Cleveland Harborfest sets minds -- and everything else -- adrift. 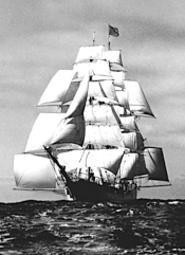 Europa: One of the big-ass boats coming to town as part of the Harborfest Tall Ships Challenge.

Fourteen ships from the United States and abroad sail into town next Wednesday for the start of the Cleveland Harborfest -- Tall Ships Challenge. The five-day festival begins with a two-hour Parade of Sail past North Coast Harbor, where the ships float in single file at a five-knot pace.

This year's Harborfest follows the inaugural event of 2001, when 235,000 spectators oohed and aahed at the moored vessels, and city officials did the same at the $30 million the event pumped into the local economy. Unlike in 2001, this year's festgoers can actually take to the water: For an additional $25, the Windy II, a 150-foot schooner from Michigan, takes passengers on 90-minute Lake Erie excursions five times a day.

"This fleet will be like nothing ever seen before on Lake Erie and the Great Lakes," says Terri Bell, vice president of IMG Special Projects, the event's promoter. The Tall Ships fleet is differentiated by several classifications, spanning centuries of maritime history. The schooner Appledore IV is an 85-foot environmental laboratory on the Great Lakes, where it collects and analyzes water, sediment, and plankton samples. The 103-year-old Edward M. Cotter from Buffalo is the nation's oldest fireboat. The 68-foot Niña is a replica of Christopher Columbus's caravel.

Three of this year's tall ships hail from foreign ports: The 245-foot barkentine Caledonia is an oceanographic research vessel based in Halifax, Nova Scotia; the three-masted, 180-foot Europa, from Hamburg, Germany, and the 177-foot INS Tarangini, from India, are training ships for commercial sailors.

The fest treats kids to magicians, face-painters, mimes, and clowns, and live music will be supplied by island troubadour Pat Dailey, reggae mon Carlos Jones and the P.L.U.S. Band, and the Junior Cleveland Orchestra.

The festival wraps up on Sunday, July 13, though the adventure continues for 14 Cleveland school students, who will spend the next seven days on board the Denis Sullivan, a 134-foot schooner that serves as a floating classroom. The kids will sail to Milwaukee to conduct offshore experiments on the ecosystem and learn more about maritime history, while the other ships race to their next stop in Toledo for another water parade.

The ships' visits to Cleveland and Toledo couldn't have come at a better time -- just as Ohio celebrates its 200th anniversary. Stephen George, the state's bicentennial commission director, remembers when similar harborfests in 1976 made an impact on spectators in New York and Boston. "Those became exclamation points to celebrate the nation's bicentennial," he says. "This will be a slice of Ohio's birthday cake here in Cleveland."