The Grand Prix races under the stars. 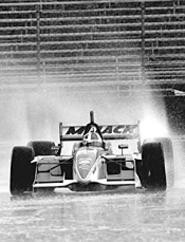 For the first time in its 21-year history, the Cleveland Grand Prix will howl at the moon this year. Twenty-two electrical towers have been erected at Burke Lakefront Airport to illuminate the 2.106-mile track, equaling the intensity of light given off by half a million car headlamps. "The lighting of the track will spark interest from not only all the fans, but also every person who passes by the track on the [Shoreway] for the days leading up to the event," says Christopher Pook, president of Championship Auto Racing Teams.

Defending champ Patrick Carpentier looks forward to careering through the maze of airport runways at night. He finished second in CART's first-ever night race, in Milwaukee in May. "The Cleveland track is so wide open that it should be even better for [the racers] at night," he says. "[It] will definitely add more excitement to it." Time trials, practices, and preliminary races run throughout the day Thursday, Friday, and Saturday. Gates open at 11:15 a.m. Thursday, 11:45 a.m. Friday, and 1:30 p.m. Saturday. The big race takes place at 8:30 p.m. Saturday. Admission ranges from $5 to $120 for a three-day pass. It all happens at Burke Lakefront Airport, 1501 Marginal Road. Call 800-498-7223 for more information. -- Cris Glaser

It's hard to say exactly what's in store for tonight's WWE Up Close & Uncensored, but with the Undertaker, Doug Basham, and Crash there, it's safe to assume there'll be more than a few smackdowns taking place. A ring collapsed during a championship match last month -- which not only is cool, but also proves just how dedicated these men are to their craft. Then again, how up close and uncensored do you really wanna get with a guy who calls himself Spanky? It takes place at 7 at Gund Arena (100 Gateway Plaza). Tickets range from $20 to $40, available by calling 216-241-5555. -- Michael Gallucci