A brand-new Jesus busts a move on the State Theatre stage. 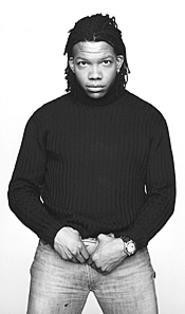 Superstar! Michael Tait, a.k.a. Jesus Christ, gets a messianic complex in Hero.
Hero -- The Rock Opera is a contemporary musical about a certain water-walking, leper-healing, water-into-wine messiah. Sound familiar? "I never saw Jesus Christ Superstar," says Michael Tait, the superstar savior of Hero, which plays Friday at the State Theatre.

Surely somebody behind this new show has. Which prompts the question: Christ, do we really need another rock opera about the Son of God? "From what I understand, Jesus was portrayed as a playboy [in Superstar]," says Tait. "Ours is more true to the Bible." He oughta know. As a member of the Christian rock trio DC Talk, Tait and his mates sold more than seven million records to God-fearing kids over the course of a decade. Hero is his latest opportunity to spread the word. "We definitely want to reach the kids who have faith and get them to seek," he says. "Sometimes seeing things visually gets you excited about what you already have inside of you."

Hero offers plenty for the senses. The modern interpretation of the gospels is set to rock, pop, gospel, R&B, and rap music. The story takes place in the 21st century, when a government entity called ICON rules the world. A child named Hero is born in Bethlehem, Pennsylvania, and flees to New York with his family. There, he starts to speak out against ICON's wrongdoings.

So, how exactly does Hero differ from Superstar? For one thing, Jesus is black and sports dreads. "That's cool, because at my dad's inner-city church in Washington, D.C., I [used to see] pictures on the walls of a blond-haired, blue-eyed Jesus," Tait says. "This is a provocative way to get people talking about the gospel again."

And unlike Andrew Lloyd Webber's Superstar, Hero has an earnest message --and a mass-media marketing campaign -- at its center. It was created by Eddie DeGarmo, head of the Christian music publishing division at EMI Records, as a way to get young people to embrace Christianity. He also put together a two-disc soundtrack, launched an interactive website, and commissioned comic books and a trilogy of graphic novels to promote Hero's ideology.

"[DeGarmo] wants a demographic that includes [entire] families," Tait explains. "So the comic book is for younger kids, the graphic novel is for high school kids. And the record has everything: rock, rap, hip-hop, rhythm & blues, Latin, and pop."

Tait insists the show's hectic schedule -- 19 cities in 22 days -- doesn't bother him. "It's safe to say that everybody, including Jesus, will be exhausted," he laughs. "But this play has reignited my faith. I realize the love and the selflessness that the almighty creator of the universe had toward a mankind who ignored him and rejected him."

Tait halts his sermon in time to add, "I don't think it's preachy one bit. I'm not big on that. You will, however, get rocked."