The Queen of Clubs

DJ Rap touches down at Modä for the PlayStation 2 tour. 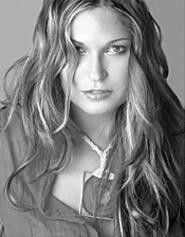 DJ Rap, spinning tunes at Mod Friday.
Charissa Saverio has led a charmed life. As a kid, she romped in the palatial digs of the luxury hotels her stepfather managed in Asia, Europe, and Africa. By her early teens, her family had settled in England, where she practiced piano and tended to the horses.

Then Saverio had an epiphany: While watching a London DJ work the turntables at a party in the late '80s, "The light bulb was turned on in my head," she says. So she "jacked in" her job at a law firm, bounced her difficult boyfriend, and started hosting raves as DJ Rap. "I love the scene with a passion," says the 34-year-old, "and this seemed to be a perfect solution and a good platform that could take me anywhere."

That it has. Saverio, often referred to as "The Queen of Drum & Bass," is nearing the end of a 12-city stint, opening for Dutch DJ Ferry Corsten on the PlayStation 2 Dual Play Tour, which comes to town Friday. "It's not grueling, when the gigs are fantastic," she says. "I know what grueling is. I've played every goddamn club in the world, it seems."

When working in London's East End clubs grew old, Saverio moved to L.A., where she spins regularly at the Hush Hush Club. "[London's] such a small place that I had reached the top of my game in the U.K.," she says. "Once things get too comfortable, I do things that turn my life upside down."

So it was only fitting that Saverio would drop everything last month to narrate a British TV documentary about underprivileged children in Ghana. There, she talked about the country's money problems, while kids ran and played in their tattered clothes "without a worry that some pedophile would snatch them from the streets." Saverio realized that money doesn't always make children happy. "What they lack in material things, we lack in soul and spirituality," Saverio says. "And I think, Jesus, we have all this fucking money, and you can't even talk to your neighbor."

On the PlayStation tour, Saverio is an aggressive junglist, mixing snarling bass drops with multirhythmic percussions and an occasional vocal teaser. Her sultry, whispery voice matches her trademark good looks, which come courtesy of her Italian-Malaysian ancestry. They've no doubt played a role in her crossover success: She's made a commercial in England and has also scored a hosting gig on a weekly music show for Spike TV, and she earned a role in an upcoming Wes Craven flick. Her background in martial arts -- she's an orange belt in American Ninjitsu -- also helps her onscreen aspirations. "If I'm lucky enough to get in the movies," she says, "it'd be nice if I could kick some ass."