Rancid overcomes death, divorce, and a sore back to deliver its most personal album. 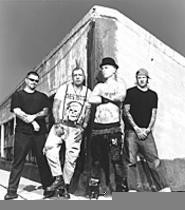 All in the family: The members of Rancid are friends first, bandmates second.
For the past decade, Rancid's bare-knuckle punk has been synonymous with broken bones, not broken hearts. But all that changed earlier this year, when Rancid frontman Tim Armstrong weathered a high-profile divorce. His wife, Distillers singer Brody Dalle, left him and promptly engaged in a very public fling with Queens of the Stone Age singer Josh Homme that included photos in Rolling Stone of the two tongue-jousting. Armstrong was devastated, and so was his band.

"When we found out that happened, we were right in the middle of making the record," Rancid bassist Matt Freeman recalls. The band was in the process of recording Indestructible, its sixth LP with producer Brett Gurewitz. "He told us on a Sunday morning, and we went in and talked to Gurewitz and said, 'That's it, we're stopping.' We stopped the record cold. By Sunday afternoon, me and Tim were driving up Highway 5 back to the Bay Area. He just had to get out and process this shit.

"I've known Tim since we were five years old," Freemans says. "We're friends first and bandmates second. We've been playing music together since we both started playing music. We went away, took a week or two off, and recorded seven new tracks."

Armstrong's relationship woes weren't the only obstacles en route to what became Rancid's most personal album. There were deaths: of Freeman's beloved grandmother and friends Dee Dee and Joey Ramone, as well as Joe Strummer. Then there was guitarist Lars Fredriksen's aching back, the product of a degenerative disc disease.

"His back was just fucked, and he had to have an operation," Freeman says. "I drove him down to the doctor every week, and it was scary. But we took time off. We didn't care. We told him, 'It's OK, we'll take two years, five years, whatever.'"

Rancid's familial bonds have come to define the band almost as much as its snarling, clenched-fist punk. They even started that way: Formed by Freeman and Armstrong in 1991, Rancid was Freeman's way of distracting Armstrong from battles with alcoholism. The two had already gained some notoriety as members of Operation Ivy, the seminal Bay Area ska-punk combo that introduced Armstrong and Freeman to life on the road.

Operation Ivy disbanded in 1989, and Rancid took off two years later. Its bruising, self-titled debut blended Armstrong's sauced slur with a thoroughbred's velocity. The first breakthrough came the following year, when the band's second album, Let's Go, went gold, making Rancid a leader of punk's second wave, alongside Green Day and the Offspring. Over the next three albums, Rancid was met with equal parts criticism and acclaim. Some praised the band's old-school ethos and hardscrabble sound; others dismissed it as a reggae-influenced, cut-rate Clash.

More ire followed when Rancid left its longtime label Epitaph and signed with Warner Bros. for the August release of Indestructible. Hardly the work of a band compromising its sound for a major label, the album is the group's most affecting, all-encompassing release yet. Tempering the nut-grabbing blitz of 2001's scalding Rancid (the band's second eponymous set), the album picks up where 1998's diffuse Life Won't Wait left off, working tropical reggae and teeth-gnashing rockabilly back into the mix. The emotions are as strident as the tempos, especially on the breakneck breakup song "Ghost Band" and the Caribbean lilt of "Tropical London." "If you lose me, you lose a good thing, that's one thing I know for sure," Armstrong sings on the tune, sounding equally glum and galvanized.

Elsewhere, Rancid celebrates the ties that bind the members -- most notably on the first single, "Fall Back Down," a song of bad times and brotherhood. In the video for the cut, the band is seen playing dominoes with Kelly Osbourne and Good Charlotte's Benji Madden, two rockers often derided as punk pretenders. Predictably, Rancid couldn't care less.

"My dad was a cop, I'm not. We accept all," Freeman says, dismissing the scorn of scenesters. "Punk's whatever you want it to be. There's always new bands coming up, and there's some great bands right now. Good Charlotte is a great band. Sorry. I love music. Period."

Inclusiveness has long defined punk anyway. The genre's never really been about a unified sound -- there's not a lot of common ground between the Damned and the Clash, the Misfits and Bad Brains -- nor was it about political agendas, as the Ramones believed. Punk was simply about tearing down the boundaries between artist and audience, about making everyone feel like they could get onstage and express themselves, regardless of ability. Most of all, it was about acceptance, and few bands have kept that spirit alive the way Rancid has over the last 12 years.

"One of the things we say is that we didn't find punk rock; punk rock sort of found us," Freeman says. "I was a freak kid, had no social skills, didn't fit in anywhere until I started to go to punk shows. Then there was all these people who were as fucked up, or more fucked up than I was. It was sort of like 'Wow, this is rad. I'm accepted here. I'm not a freak.' I think punk rock is still about that. There's always gonna be fucked-up kids that have some fucked-up shit at home, or God knows what's happened to them," Freeman sighs. "Punk rock is a refuge from that."