It's a monster mash at the Gund.

By Cris Glaser and Allen Miller 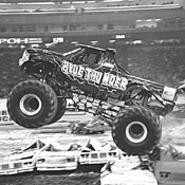 Blue Thunder, Tony Farrell's big-ass truck, is capable of reaching speeds of up to 70 miles an hour -- and sailing 25 feet in the air to clear 14 cars parked side by side. Not even LeBron's Hummer can do that. The 9,000-pound Ford F-150 Super-Duty with 66-inch-high tires is part of this weekend's U.S. Hot Rod Monster Jam at Gund Arena. "We're hoping to go kick some butt," says Farrell, who will follow up his Cleveland appearance by competing at the World Championships in Las Vegas next month. The U.S. Hot Rod Monster Jam revs up at 8 p.m. Friday and Saturday at Gund Arena, 1 Gateway Plaza. Tickets range from $20 to $25, available by calling 216-241-2121. -- Cris Glaser

Wanna make your Valentine's Day special? Pick up a few courting tips from the experts at Saturday's Owls in Love. It works pretty much like a night in the Flats: The nocturnal birds relay a series of hoots, then respondents do a little dance, accompanied by a groovy display of head-bowing, tail-bobbing, and feather-puffing. "They [also] show affection by rubbing their bills against each other or preening each other," says naturalist Bonnie Marras, the program's host. Participants will hunt for love nests in the trees and search the ground for decidedly unromantic "owl pellets." Prerecorded owl calls will be played in hopes of luring a couple of real live birds into compromising positions. The lovin' starts at 8 p.m. at the F. A. Seiberling Naturealm, 1828 Smith Road in Akron. Admission is free; call 330-865-8065. -- Allen Miller

Kent State's standout point guard, DeAndre Haynes, will lead a balanced scoring attack Saturday when the Golden Flashes take on Mid-American Conference rival Bowling Green for the second time in three weeks. The sophomore from Detroit leads the team in assists and scored a career-high 21 points in Kent's 71-64 victory at Bowling Green last month. The Flashes hope to shore up their lead in the East Division, while the Falcons need a win to stay competitive in the West. Tip-off happens at 4 p.m. at KSU's MAC Center, 191 MAC Center in Kent. Tickets range from $10 to $17, available by calling 330-672-2244. -- Cris Glaser