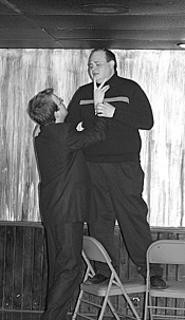 A guy and his wife walk into adjoining voting booths. As they punch their ballots, they steal glances over each other's shoulders to see if they're politically compatible after all these months of marriage. It sounds like a scene from an old Mad About You episode, but it's actually a sketch recently played out at Tuesdays at 9, a weekly improv comedy jam by "lost refugees" of the defunct Second City Cleveland. "These are incredibly talented people simply doing the work for the sake of creating great comedy," says Cody Dove, who formed the free get-togethers a couple of months ago.

The performers leave it to audience members to shout out words and phrases to create spontaneous story lines. Performer Marlene Kelly likens the concept to a classroom for aspiring comics. "Like anything else in life, practice makes us perfect, or at least better than we were when we started," she says. "Improv comedy is about working with your scene partners in the moment to create the funny."

Many of the skits take on a political bent or explore edgy, social messages -- like the one where an NRA member buys a gun for his raging pregnant wife. Naturally, the dialogue occasionally earns an NC-17 rating. "Since it is improvisation, you never know what will be said," Kelly says. "But we don't want anyone leaving a performance feeling like they need to take a shower." Tuesdays at 9 is at 9 p.m. Tuesday at Bassa Vita, 1572 West 117th Street in Lakewood; call 216-521-4386. -- Cris Glaser

Give the Taylor twins of Brunswick a choice, and the 13-year-olds pick the White Water River Ride as their favorite attraction at the I-X Indoor Amusement Park. It's a 65,000-gallon pool that replicates a whitewater-rafting experience. "It's, like, so awesome," says Rochelle, as sister Michelle nods in agreement. "But I don't recommend it if you get seasick." They probably don't advocate the Heart Flip, Dragon Wagon, or Crazy Bus attractions either. The fun runs Thursday May 2 at the I-X Center, 6200 Riverside Drive. It's open from 10 a.m. to 10 p.m. Thursday, 11 a.m. to 11 p.m. Friday and Saturday, and 11 a.m. to 10 p.m. Sunday through Wednesday. Tickets are $9 to $18. Call 800-897-3942 for more information. -- Cris Glaser

If it's karaoke night, Greg Shirley is there. But there'll be no teleprompter to help him remember the lyrics at Akron Idol, the gay bar Interbelt's version of the hit TV show. Every Sunday through May 16, house diva Danyel Vasquez and guest judges will eliminate singers -- gay and straight -- until only one is left to snag the cool $500 prize. "People say I sound like Tiny Tim, but I've always thought I had a Stevie Nicks thing going on," says Shirley, who either needs another set of critics or a hearing check. "But if Clay Aiken can win, I stand a chance." Show time is 9 p.m. at the Interbelt, 70 North Howard Street in Akron. Admission is free. Call 330-253-5700 for more information. -- Cris Glaser

Filling baskets sure is tough work, and the Easter Bunny can use all the energy he can get. Carbo-load along with him at Breakfast With the Bunny at the Akron Zoo on Saturday. After feasting on donuts, muffins, and, of course, eggs, E. Bunny will pose for pictures and host an egg hunt. Zoo staffers will fill guests in on what other animals eat first thing in the morning, and some live animals will be hauled out to do some noshing. It happens from 9:30 to 11 a.m. at the Akron Zoo, 500 Edgewood Avenue in Akron. Admission is $18, $15 for kids (which includes zoo admission), and reservations are recommended. Call 330-375-2550 for more information. -- Allen Miller