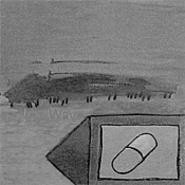 The New Wave is fond of an old trick: making pretty songs out of ugly noise. Here, feedback is an instrument, conjured by overheated amps and lots of broken strings. Most songs start with a hum and end with a heart attack.

Though the Cleveland trio has been around less than a year, its ragged debut EP shows promise, if not polish. The raspy croak of singer-guitarist Bryce drifts in and out of tune. He's buttressed by a monsoon of distortion and a deft rhythm section that cuts through the din with clever, concise playing. The band constantly alternates beauty with abandon, coming with shrill peals of buzzing guitar on "Power of Goal Setting," then allowing listeners to remove the cotton from their ears on the moody, meditative "The Escape of Ernst Watzl." Here's hoping that their hearing holds up long enough for these guys to fulfill their potential.