Friday, May 7, at the Rhythm Room. 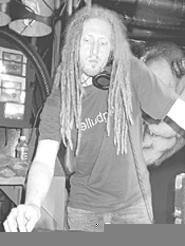 Hive
It might be hard for recent DJ Hive converts to imagine, but the California jock hasn't always been into drum & bass. As a high school kid in Washington, D.C., he played guitar in a hardcore punk band. After moving to Los Angeles in the early '90s, he jumped to hip-hop, intrigued by the possibility that, with a sampler and a few other sound components, he could control all the instrumental aspects of a song by himself. He released an instrumental hip-hop album on his own in 1997, then inked a deal with London/FFRR, on which he released Devious Methods in 1998. That album marked Hive's first flirtations with drum & bass, as he shifted adeptly between hip-hop and double-time drum & bass rhythms. He even flaunted his hardcore influences by plucking a riff from the Bad Brains classic "Re-Ignition" and nestling it in among the rugged breakbeats of "Ultrasonic Sound," which was included on the blockbuster Matrix soundtrack in 1999.

Hive's transition toward the dance floor was swift and fierce: He began promoting a weekly drum & bass night in L.A. and simultaneously pumped out a torrent of raved-up jungle tracks with steroidal bass beats and synth riffs that screamed louder than sirens. He caught a major break in 2002, when he was commissioned to remix Rob and Goldie's "The Shadow," a seminal U.K. track that he injected with battering-ram breakbeats. "Death Threat," a recent collaboration with British producer Keaton, features a dizzying MC performance by underground favorite Busdriver. The duo's latest together, "Bring It On," rides high on a thugged-out hip-hop chorus and a horn sample shrewdly swiped from Joe Budden's recent club hit, "Pump It Up."