An Xtreme slugfest earned a slot on X-Fest. 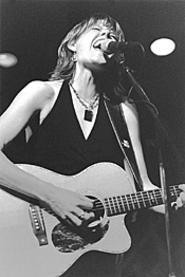 Wanda Santos-Bray
Anne E. DeChant, celebrating the release of her new CD at the Winchester, May 22.
The Cleveland band Dirt opened last Friday's X-Fest, and it earned the time slot by roughing up another band. In a boxing match sponsored by 92.3 Xtreme Radio's morning show, Dirt frontman Dave "DBC" Burzanko outpunched Liquid's Joe "Joey D" DePasquale in a unanimous decision to win the concert's coveted opening slot for the second straight year.

"You hear 'battle of the bands' all the time," says Rover, host of Rover's Morning Glory. "And then you get 10 bands onstage, and four people show up to watch. This way, you narrow it down to musicians that everybody likes and let them go at it."

In the preliminary fights, Liquid's DePasquale won a unanimous decision over Reason's Mike "K.O." Calo, and Burzanko survived a knockdown to take a split decision over Seventh Edge's Dave Graznik.

"It was rough gettin' out there," says Burzanko. "I don't want to be here next year. I want my band to get signed."

Dirt's new album, Welcome to the Pressure Cooker, is slated for June 15 release. The disc will feature a cover of DMX's "Who We Be." Dirt's version of LL Cool J's "Mama Said Knock You Out" is available on 92.3's website.

· 12 Monkeys + Beatmakers Local 913 = one fat track. Patternbased.com, the online home of Akron's Beatmakers hip-hop collective, has posted a new track featuring 15 of the area's premier MCs and producers, including Heiku, Siege, Krossword, and Furious of Cleveland's 12 Monkeys crew, in addition to Akron's Phonologic and former Poet of Another Breed Joe Minadeo.

· Veteran blues singer Becky Boyd suffered a collapsed lung and bruised rib in a nasty fall at home, but is playing through the pain. She performed at the United Auto Workers' Robert Lockwood Jr. Blues Festival on May 15 and hasn't scheduled a break. "I have to buy groceries, you know," she says. Becky Boyd & Real Life play the Parkview (1261 West 58th Street) this Saturday, May 29.