RJD2 makes fresh sounds out of music even he can't stand. 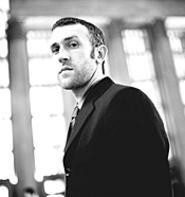 RJD2: Two strong solo albums set him well ahead of his peers.
"When you're sampling stuff like James Brown, Roy Ayers, or the Meters, it's pretty hard to fuck up," admits hip-hop producer RJD2. "Almost everything they did was good in the first place, so you kind of have to be an idiot to sample the stuff and make a bad record."

It seems like a nonissue, since RJD2's debut solo album, Dead Ringer, released in 2002 on El-P's Def Jux Records, proved that the 28-year-old Columbus native could probably squeeze funk out of a Dishwalla record. But RJ was relatively unknown back then; he had worked mostly to produce tracks, for Copywrite and other members of his hometown Megahertz crew, that surfaced on underground labels like Fondle 'Em and Rawkus Records. With a low profile like that, he probably did get away with pirating some choice licks from artists like Brown and Ayers.

"I was at a place in my career where I didn't have to worry about it. I didn't give a shit," he says. "The only ethic that I took to it, as far as sampling, was that I tried not to use anything I knew somebody had used before."

The results were stunning. Dead Ringer weaves through grandiose funk explosions, soul-filled slow-burners, punchy cinematic interludes, and mournful blues without running out of gas. Sure, there are plenty of idiot-proof vintage organ riffs, guitar licks, and brassy horn stabs, but what stands out is the bevy of kitschy pop-culture extras he sprinkles in every so often: Snippets of TV Land dialogue, Baptist spirituals, Batman-like action effects, and that skronky crescendo from the end of the Scooby-Doo theme song pop up along the way. What's more impressive than the dedication and patience it must have taken to harvest all these fragments is how harmoniously each dovetails with the next, making it virtually impossible to believe that they weren't all originally meant to roll along atop RJ's carefully crafted breakbeats.

Still, to RJ, none of this source material seems profoundly obscure, and one of his goals when he set out to create his second solo record, this year's Since We Last Spoke, was to pull the building-blocks of his tracks from new and different places.

"I kind of got into this thing where I was trying to use samples of music that I wouldn't listen to . . . stuff that I didn't like or didn't think was good. It sort of turned into this little challenge."

It's obvious from a casual spin that RJ lived up to his goal. Since We Last Spoke steers clear of conventional funk and blues territory on most tracks. Its samples are drawn instead from tangy, mellow R&B, synth-laden '80s rock, and even Latin-flavored dance numbers. As expected, the patchwork-style hip-hop that results from these new sources bumps just as hard as Dead Ringer did during the uptempo numbers and shines with equally convincing soulfulness on the downtempo tracks.

The album falters only on a pair of vocal cuts that lean a little further to the left than expected. RJ handles the singing on both of them -- the bashful, blue-boyish "Making Days Longer" and "Through the Walls," which apes Rick Springfield and Elton John at turns. Given the album's title and RJ's decision to handle the vocals, both songs play out like calculated attempts at revealing a newly polished "traditional" songwriting sensibility. Turns out that's not at all what he had in mind.

"It was adapted from a sample," he says of his lyrics for "Making Days Longer." "It was an obscure record, but it wasn't so terribly obscure that nobody was ever going to find it, so I thought, 'Well, I wanna get this resung.' I was trying to get other people to do it, and nobody else could do it, so at a point, I just started trying to do it myself." He did the same for "Through the Walls."

There are plenty of critics who will insist that "traditional" songwriting takes more creativity than sample-based songwriting, but whether or not RJ ever seeks to placate those people -- and there's no reason he should -- he does have a far-sighted outlook on where he'd like his career to go.

"I think in terms of lineage and track record, because I don't know if there's such a thing as a perfect record. The only thing better than a Stankonia by OutKast is a group like OutKast progressing from Southernplayalistic through Speakerboxxx."

Matching OutKast's discography would be no small task. But RJD2 already has two solid albums under his belt -- a feat unmatched by the majority of his peers. Most other sampladelic producers struggle to make albums that can sustain listener interest long enough to pass as more than background music (Prefuse 73 is a notable exception). Once-revered hip-hop instrumentalist DJ Shadow, for example, turned in a sophomore effort in 2003 that caught him sounding downright uninspired.

RJ insists he still has a lot to prove, and not solely as a solo artist. After finishing up Dead Ringer, he moved to Philadelphia and spent the next year producing beats for a number of rappers. In addition to producing 8 Million Stories, the debut for Soul Position (a duo completed by MC and fellow Columbus native Blueprint), over the past two years he contributed beats to albums by such MCs as Cage, Murs, Aceyalone, Diverse, and the Weathermen.

"I love it -- it's a different challenge," he says. "Doing that well is a completely different discipline from doing the technical-production/instrumental thing well."

And what part of his game needs more work?

By his own admission, RJ can spend weeks fiddling with the drumwork and tweaking samples on his solo tracks in order to get things just right, so it's hard to figure out why producing the simpler "backbeat" type of material would be a tougher craft to master.

"It's just a very Zen-like discipline. I kind of see it as the difference between a good recipe and just a good piece of meat. It's like the difference between going to a restaurant and having a piece of fish that's marinated and spiced right -- that's like a big, technical, ornate thing -- compared to just cooking a fish the instant that you've caught it and cooking it well. It's much simpler, but it's harder to do, and it's a lot purer. That's the best analogy I can come to."