A Cleveland avant-jazz great raises hackles again. This time, from the grave. 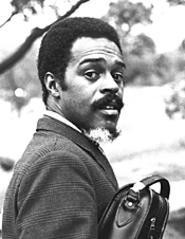 Albert Ayler's music was so challenging, it got him banned from some local clubs.
Albert Ayler, a controversial saxophonist known for his startling, otherworldly music, is fanning the flames all over again.

Some say the Cleveland native couldn't negotiate the changes and chords that any respectable jazz saxophonist ought to know. Others call him a pillar of avant-garde jazz tenor, along with the similarly divisive Ornette Coleman and John Coltrane, the most legitimized and commercial of this titanic trio.

On October 5, Revenant Records will release Holy Ghost, a nine-CD box of Ayler material spanning from 1960, when he played in an Army band, to 1970, when he died at age 34; his body turned up that November, drowned, in Brooklyn's East River. Some say he was murdered, alluding to a drug habit that led to mounting debt. Others assert that he touched nothing harder than marijuana. While Ayler's death remains unexplained, his music is beginning to make sense, thanks largely to this remarkable set.

Clearing Holy Ghost for release, however, hasn't been easy. "There are several contestants to the estate, and ultimately, all of them will get something out of this," says Ben Young, the set's primary researcher. For some of them, satisfaction might be a long time coming.

Carrie Roundtree Lucas, who dated Albert in 1957 and had a son by him in 1958, says Revenant contacted her about the box, and "everything's OK." Their son, Curtis D. Roundtree, has ultimate authority over Holy Ghost, she says.

But Arlene Ayler, who was married to Albert from 1964 until his death, hasn't even heard of the Revenant box. Though she says she's not party to Albert's estate, she claims that their daughter, Desiree, is.

"I don't want a story put out on this," says Desiree, who receives royalties for her father's work on another label. "I'm going to call my lawyer. There's no story going to come out on this, when I didn't even give the permission for [Holy Ghost] to come out."

Also likely to benefit from the boxed set's release are Ayler's father, Edward, who still lives in Warrensville Heights, and his brother, Don. Albert's trumpet foil in their groundbreaking groups of the mid-'60s, Don Ayler is a resident at Cleveland's Northcoast Behavioral Healthcare Center, pending a hearing on charges of gross sexual imposition and sexual battery stemming from an incident last November.

Besides his surviving family, many musicians who played with Albert still live in greater Cleveland, among them Lloyd Pearson, a tenor man who led the R&B group the Counts of Rhythm with Albert in the '50s, when Albert was a golf star at John Adams High School and Lloyd was at East Tech.

"Albert was a nice cat, a gentle person," says Pearson. "Everybody liked him. He went in the Army and came back with this new type of music. He came back playing a new horn, but he wasn't playing the regular, standard blues changes. He was playing him."

Besides the music, each Revenant box contains a dogwood blossom (intended to enhance the set's "organic" feel), reproductions of posters of Ayler shows, tributes to Ayler from those turbulent times, and a hardbound book of more than 200 pages reflecting on the arc of Ayler's tempestuous career and mysterious life. The book is crammed with information about all of Ayler's known performances and recordings, considerations of his art by Amiri Baraka (formerly Leroi Jones; the black militant philosopher was among Ayler's earliest champions) and British journalist Val Wilmer, and reminiscences by a wide range of friends and acquaintances.

Ernie Krivda, a Lakewood-based tenor saxophonist, jammed with Ayler in the early '60s at "105," a legendary strip on Euclid Avenue around East 105th Street.

"At this particular time, guys are starting to do different stuff, and the 'new thing' is kind of at hand, so cats are experimenting," Krivda remembers. "Albert Ayler would come in and play, and it would be kind of upsetting to a lot of people. There's a sense of irony to this, because he wasn't the only one doing this, but something about his demeanor got him banned. The funny thing is, [early Ayler disciple] Frank Wright was also sitting in, and he was as 'out' as you could be, but they liked him.

"The thing with these particular guys was, they fundamentally weren't real solid. Everybody tries to draw comparisons to the music of [Arnold] Schoenberg, [Anton] Webern, that kind of thing, but those people were fundamentally very sound. But it was an interesting time, and it did challenge the music, and there are things that were part of it and we could use."

Accessible Ayler tunes, such as "Spirits Rejoice," "Our Prayer," and "Bells," seem to spring from a timeless well of marches, spirituals, gospel, even folk. Ayler was a marvelous, accessible melodist, as well as a challenging, exhausting improviser. That juxtaposition makes his music striking -- and much more aggressive than he was in person.

"He and his brother were really, really friendly guys," says Jon Goldman, an aficionado of imaginative jazz. "In the '70s and '80s and '90s, you would read interviews with rock musicians who listed him among their influences, whereas he encountered a lot of hostility from mainstream jazz musicians." Wynton Marsalis, Goldman recalls, "admitted to me that despite the fact he'd never really even heard an Albert Ayler record, he still disparaged his approach to music."

That approach and Ayler's complexity appeal to Dean Blackwood, who co-founded Revenant Records in 1996. His mission: to present "raw musics" in upscale, meticulously recorded and researched packages. The seven-CD, $150 Revenant box Screamin' the Blues: The Worlds of Charley Patton won three Grammy awards in 2003. The Ayler box, retailing for $100, is likely to win a Grammy or three of its own next year.

"You've got this guy from a fairly conventional background -- he grew up in fairly comfortable circumstances, he was captain of the golf team in high school, and he played as a teenager in Little Walter's blues band -- and suddenly he decides to make a complete break with not only jazz convention, but really, musical conventions of pitch and form, to really break out on his own," Blackwood says. "While he had certain models in Coltrane and Ornette, they weren't necessarily musical blueprints; they were more like spiritual and moral models. His music sounds nothing like any of these guys. The kicker is, despite repeated and violent rejections at every turn, not only from audiences but from fellow musicians . . . this guy soldiered through."

"At first, I couldn't understand it," Edward Ayler says of his son's music. "But later on, I really took to it, saw where he was coming from and that he was really exceptional, that the music was out of this world. I understood it then. I have never heard any music like that."