From waitressing to an eating disorder, a young pop star spills. 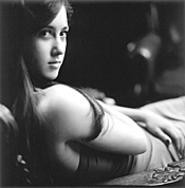 Dancing days: Carlton breaks out the ballet slippers in her latest video.
Before Vanessa Carlton became a familiar face in Teen People and on MTV, the brunette was just another accomplished pianist-dancer deglamorizing the starving-artist cliché. The 18-year-old -- raised in small-town Pennsylvania but newly graduated from N.Y.C.'s prestigious School of American Ballet -- lived in Hell's Kitchen and was gigging around the city, doing what she had to do to make ends meet.

In other words, she worked as a waitress.

"It is definitely tough to deal with hungry New Yorkers," she asserts. "It can get really rough. When you're an 18-year-old who's kind of . . . I don't know, not the kiss-ass waitress type, [there can be] animosity between the customers and the waiters. It's a hard environment, you're really worked to death, and you're running around serving food.

"But, whatever, it was good, and I had to make money, and I'm glad I did it. I'm not someone who just went from living in my parents' house to becoming a little rock star, not knowing what it's like to work and struggle and how to define myself on my own terms. I'm glad I did it."

Asserting her individuality is a concept Carlton mentions often throughout the course of an interview, although the 24-year-old's prodigious abilities have always made her unique within the brat-pop pack. Her 2002 debut album, Be Not Nobody, was a collection of classical music firestorms with Top 40 chops, highlighted by the breezy, Joni Mitchell-finds-her-inner-child single, "A Thousand Miles."

With her boyfriend, Third Eye Blind singer Stephan Jenkins, producing, Carlton chose to record part of her sophomore album, Harmonium, at George Lucas's Skywalker Ranch outside San Francisco. The sprawling landscape suited the musicians well -- they rode to the studio on bicycles every day -- although the record was finished in Los Angeles because, as Carlton dryly puts it, "When you're in the middle of a bunch of cows, the pace of things tends to slow down.

"I just wanted to establish my place with an album that's undeniably me," she says. "Everyone wishes that they could do that on a first record, but it's hard to when you're 20 years old," she laughs. "This record defines my sound even more so than the first.

"Every day it was a struggle to keep the project together, because it's not necessarily supported when you want to venture off and do something different. Everyone wants you to do a sequel to the first, part two -- and I wasn't going to do that. I just knew that would be the wrong direction for me, and I wasn't going to settle for anything less than the truth on this record."

Due out November 9, Harmonium sounds more poised, with thoughtful arrangements and richer instrumentation creating a mature mood. Although its first single, "White Houses," swirls in a Kate Bush-like blur of strings and ivory-rocking chords -- and features Fleetwood Mac's Lindsey Buckingham on guitar -- its lyrics are more Judy Blume circa Forever than Freckle Juice: The tune is a strikingly honest account of, among other things, losing one's virginity. The rest of the album downplays the girlishly perky piano of Nobody, instead focusing on introspective songs that veer from soaring, music-box trifles ("San Francisco") to the sophistication of recent Tori Amos ("C'est la Vie," "Winter"). Clearly, Carlton didn't wanted to remain trapped in any sort of perpetual-youth holding pattern on Harmonium.

"I'm an unknown," she says, understating her platinum-selling success. "Imaging is so complicated, and at the same time, it gets so dumbed down, because you have very little control over the machine that will start to promote you. I was really frustrated, because you end up being this one-sentence biography, like, 'She's a pop-piano princess.' These titles that don't really define who you are."

To this day, Carlton considers herself a dancer who just happens to play music. Which is why making the video for "White Houses" -- a clip filled with her lithe spinning and leaping -- was such a cathartic experience. In fact, the short was inspired by a vision Jenkins had of revisiting her dancing days, which she put behind her after graduation.

"I really had a hard time with dance after I went to the School of American Ballet," she explains. "[It was] just a very intense, kind of fascist school, where I started to hate dancing. It was such a passion of mine for so long.

"Stephan was very tuned into the feeling of loss that I had with dance. He actually encouraged me to start it up again. [That] reinvigorated my passion for dancing. When we were in L.A. recording, I would dance every morning and then go to the studio. I was just basically doing the two things I was doing since I was four years old -- it was pretty hilarious. I enjoyed making the video. It's superpersonal. I feel like I've arrived, in a sense that all of my sides are exposed to people."

Carlton chose to speak out about other aspects of her personal life -- including her experiences with depression and an eating disorder, and her decision to go on antidepressants after signing her record deal with Interscope -- in an early 2004 issue of Teen Vogue. At first hesitant to share her experiences, ultimately she decided to open up about her struggles.

"I was like, 'You know, I don't know why I'm just avoiding this,'" Carlton says. "It was almost like I didn't want to do the story at first, because I thought it would be a sign of weakness. Like, 'Oh, what is Vanessa -- she's some depressed chick who can't get it together.' I didn't know how it was going to be interpreted. [It] wasn't really a matter of confidence, but a matter of comfort.

"Once I started reading the statistics of teens and suicide, depression, and how closed-off people are to talking about it, I was like, 'What I can say here will be helpful to others.' So I exposed a little part of myself that would affect other people positively and left it at that. I didn't really want it to be all about me, but I find a lot of people appreciated that I spoke up about it. It's nice to get a lot of thank you's and hugs from kids for doing something like that."

Such gestures of frankness leave Carlton vulnerable, but not to attack: They speak of courage and personal growth -- both reflected in her desire to be known and understood.

"I want [fans] to come away with a feeling like they know me better and that I've exposed myself more to people in a way that's honest and interesting," she says. "I'm the type of artist that will want to really experiment and come out with records that the general public isn't necessarily going to understand. That might freak out my record label, but I'm not a musician to please a company. I'm here to please myself, and I think that I have an obligation to my fans -- and myself -- just to grow as much as I can as an artist."