Ghost in The Machinist 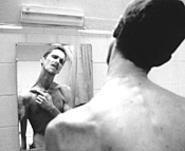 Hard to believe this is a future Batman.
It's the biopic of the year: Christian Bale is cadaverous industrial-rocker Trent Reznor, prone to temper tantrums, brooding, inhabiting colorless environments, and keeping your parents awake all night as he fronts the heavy band known as Nine Inch Nails. Oh, wait . . . that's not quite right. Christian Bale, in fact, is cadaverous industrial worker Trevor Reznik, prone to temper tantrums, brooding, inhabiting colorless environments, and staying awake all night as he operates heavy equipment that may, among other things, be used to drive nine-inch nails into solid objects. Screenwriter Scott Kosar, who penned the remake of The Texas Chainsaw Massacre and the forthcoming Amityville Horror remake, claims to be inspired by the likes of Roman Polanski, Wim Wenders, and Fyodor Dostoevsky (whose book The Idiot is prominently displayed onscreen), but it would have been nice if he could have ventured further afield than his CD collection for a lead character. You half-expect a female love interest to be named Mary Lynn Mansunn.

The movie in question is The Machinist, for which Bale starved himself down to 120 pounds, otherwise known as the perfect body weight for Calvin Klein ads. Early on in the film, he flexes the visible skeleton under his skin for deliberate gross-out effect, and it works; Bale presumably gained all his weight back to become Batman, but had he not, John Woo would need look no further for the perfect Skeletor in his upcoming He-Man movie. The explanation is that Bale's Reznik has not slept in over a year and is slowly wasting away as a result. He nods off for seconds at a time, but never more than that. Colleagues suspect that he's on drugs, and his behavior is at times akin to that of a crystal-meth addict; he scrubs his bathroom floor with a toothbrush, inch by inch, to cite one example.

As if to prove that women can be every bit as shallow about body fat as men, the freakishly skinny Reznik has two female admirers: Stevie (Jennifer Jason Leigh), an only-in-the-movies prostitute who's actually starting to fall for her favorite client, and Marie (A Walk in the Clouds' Aitana Sanchez-Gijon), a waitress at the airport café Reznik likes to frequent, in case he ever needs to make a quick getaway after dinner, he says.

One day at the factory, Reznik meets Ivan (John Sharian), a bald, beefy redneck with toes surgically grafted onto one of his hands, who looks like Alfred Molina auditioning for the role of Morpheus in the Matrix films. Ivan claims that he's just been hired, but nobody seems to know anything about him. His red car certainly stands out, as it's practically the only object in the movie that isn't gray. Ivan seems amiable enough at first, but the next day at the office, he manages to distract Reznik to the point of making him cause a major accident, amputating the arm of a co-worker (Michael Ironside, for once playing the least frightening character onscreen). But no one else saw Ivan -- or even believes he exists. Could this be a Tyler Durden situation all over again? Recall that Edward Norton's major affliction in Fight Club was also insomnia.

Director Brad Anderson loves to toy with the audience on the issue of true identity. In the romantic comedy Happy Accidents, he kept us guessing until the end as to whether Vincent D'Onofrio was clinically insane or a time traveler from the future. In the masterful horror flick Session 9, he delivered a double fake-out before finally revealing the nature of the evil. Both of those movies and The Machinist properly require a second viewing to be fully appreciated, not because "the twist" is some kind of out-of-left-field gimmick (M. Night Shyamalan knows what I'm talking about), but because it adds additional depth to what you already know. It's clear that at some point, The Machinist will reveal either that Ivan is an imaginary character or that he isn't, but that isn't a major spoiler; there's more to it than you think. For one thing, there's also the matter of the unidentified body we see Reznik dumping in one of the early scenes.

The problem with relying on a second viewing is that, the first time out, it's really tough to identify with Reznik in any way. Only toward the story's end do we get any sense of what he was like before the insomnia and the massive weight loss, and that's crucial to developing any sympathy for him. Anderson's usually really good at humanizing characters in high-concept situations -- and ultimately he manages to do so with Reznik -- but for a long time, it seems as if The Machinist will collapse under the weight of a facade composed of everything a mopey teenager thinks is really cool.

In fairness, the mopes get it right once in a while. Reznik takes a young child on a carnival ride called Route 666, a ghost train filled with woefully inappropriate imagery and designed with more loving care (and more genuine scares) than the rest of the film. Screenwriter Kosar probably got the idea from his Rob Zombie CDs, but nonetheless, props to him and production designer Alain Bainee (The Art of Dying).