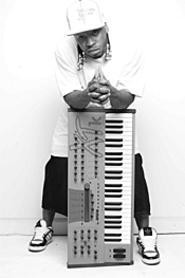 LT punches beats, not time clocks.
LT's cell phone still has a 216 area code, but the young hip-hop producer spends most of his time 1,500 miles away. He calls from Atlanta on a recent Monday morning, where it's hotter by noon than Cleveland will be for another three months. It's one of hip-hop's seats of power, a land of jewel-encrusted pimp cups, jewel encrusted-smiles, and bass that resonates like a jet fighter blasting the sound barrier. It's the place to be, for a cat like LT.

"I came down here with one of my homeboys to his family reunion," recalls the twentysomething beatmaker, known to his mother as Todd Moore. "He let me use his truck, and I broke off from the family reunion and just drove around and met all different types of people. I had no contacts or anything. I walked the streets for about three days, trying to meet people and network. I met José (Fendrick, widely known as ZEEK, manager of the white-hot Aftermath/Shady signee Stat Quo) at the Def Jam office. I didn't have an appointment set or anything, I just kind of knocked on the door on faith, and it pretty much took flight from there. I came down here on a wish and a prayer."

Both of them have been answered of late. In the past year, LT has landed a cut on Ludacris' big-selling latest album and worked with seminal West Coast MC DJ Quik, legendary producer Dr. Dre, and smash-hit songwriter Sean Garrett (whose recent chart-toppers include Usher's "Yeah" and Ciara's "Goodies"). He's produced tracks for Stat Quo's forthcoming LP, one of the more eagerly anticipated rap platters of 2005, and also got a track on the NBA Live 2005 video game. He's one of the hottest producers to hail from these parts since, oh . . . ever?

"LT has talent, but his drive separates him from many peeps in Cleveland," says Tony Franklin, a Cleveland hip-hop promoter who recently landed an executive position at Asylum Records, under the Warner Bros. umbrella. "He created his situation, utilized his networks, and believed in himself. He now sits with Dr. Dre in the studio and produces for the top cats in the game. What this has done is put some attention on Cleveland. The industry is searching for that next breakout area. LT has put a strong iron in the fire to include Cleveland as a viable area."

All this from a guy who didn't start making beats until his senior year at Warrensville Heights High.

"I was supposed to go to school for commercial art," LT recalls. "Back at my high school, I'm known for drawing. The main thing I did was airbrushing. I used to work up at Randall Park Mall at the airbrush shop. I apply everything I used to do, as far as drawing pictures and paying attention to detail, to making music."

Indeed, LT's art is palpable in his sound, which is a diverse pastiche of big, DayGlo beats and harder-edged street sounds you'd be hard-pressed to tell were crafted by the same hand. While most big-name producers have a very discernible sound (Lil Jon's synth-laden crunk; the Neptunes' slithering, serpentine rhythms), LT's calling card is the breadth of his beats.

"His range is endless, " ZEEK says. "He's a mix between Dr. Dre and Timbaland, being a visionary who actually makes the tracks 100 percent by himself. He has many placements that will surface next year with major artists throughout the industry."

Until then, LT continues to climb out of bed each morning at 6 a.m. to make beats for hours on end, his work ethic belying his blue-collar background.

"My motivation is actually my parents," he says. "My parents, they're middle-class. They've been working at Ohio Bell, Ameritech/SBC for about 30 years now. That lifestyle of working and having to wait 30 years to retire and you're living check-to-check -- I just want it better than that. I've worked over a million jobs. I've probably worked everywhere in Cleveland. Every factory. It's just not me. I just want to get to the point where I don't have to worry about how the bills get paid. I really can't see myself reporting to work and punching a clock for the rest of my life."

We can't see it either, LT.