Mama's Got a Brand-New Bag

Sharon Jones and the Dap-Kings carry old-school funk into the new millennium. 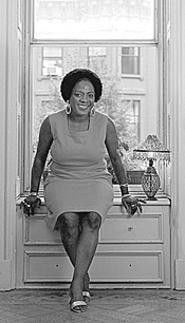 Sharon Jones: Triple the funk pleasure in one compact package.
The Dap-Kings and their label, Daptone Records, are dead serious about their funk. So it seems fitting that they're headquartered in a genuine urban ghetto: the Bushwick section of the New York City borough of Brooklyn. (To give an indication of just how bad-ass that 'hood is, note that Geto Boy Bushwick Bill actually hailed from the far less ghetto-Brooklyn section of Flatbush, but chose to adopt Bushwick as his tough-guy nom de rap.)

But Daptone isn't in Bushwick for the street cred. No, first and foremost, it's the cheap rent that enticed them. "It's a big two-family house on a real beautiful block in Bushwick, if you can imagine -- it's pretty ghettofied there," says Dap-Kings bandleader/bassist and Daptone-owning partner Gabe Roth, a.k.a. Bosco "Bass" Mann.

But what they may have established is a virtual Hitsville, N.Y.C. -- ground zero of a burgeoning Big Apple funk scene that includes the Sugarman Three, the band led by Roth's Daptone partner and Dap-King saxophonist Neal Sugarman, and rapidly rising fellow Brooklynites the Antibalas Afrobeat Orchestra, among a slew of other young acts playing a brand of music that had its heyday some three decades ago.

The eight-man Dap-Kings are the house band for Daptone, which releases CDs and even some 45s. The label has unearthed obscure older funk and soul-singing talent like Joseph Henry and Naomi Davis to work with its bands, but its big find may be Sharon Jones, who's been dubbed "Soul Sister No. 1" -- and not just because she hails from James Brown's hometown of Augusta, Georgia.

The music Jones and the Daps make is analogous to that of Brown and the JBs: funk as deep and loamy as a Southern cotton furrow and as hot as the summer sun shining above. All you have to do is flip the gender of the lead singer. The band has the sharp threads and cool moves, as well as the simmering chops to roll the groove out onto the dance floor. And Jones boasts a set of pipes that wails and howls and gets down and simmers in a way that can't help but sex you up.

Jones first came to Roth's attention while the latter was making a funk record with veteran singer Lee Fields in the mid-1990s. The 48-year-old Jones had put in many years in a series of rising bands that never quite made it, although some of them did open shows for the Four Tops, Peaches and Herb, the Drifters, and Maceo Parker. But when she first entered the studio and saw a sea of white faces, she was highly skeptical. "I'm gonna tell you just what I thought," says the diminutive but feisty former prison guard from her home in Far Rockaway, Queens. "I thought, 'What do these young white boys think they know about funk?' I thought they were joking, I thought they were playing with me. But I finally went down there, and I was like whoa!"

Bosco won Jones over to the point where she now speaks of him in mystical tones. "I told Bosco he's been reincarnated," she says. "He's really a 55-year-old black man who came back as a 30-year-old Jewish boy."

The sessions -- for Desco, Roth's previous label -- paid off. The singer shot straight to star status in the U.K., where she is now referred to as "The Queen of Funk." It's clear that she's loving every minute of her finally-found acclaim, which is just starting to blossom stateside. The band recently returned from a four-day trip to London just in time to nab a last-minute appearance on Late Night With Conan O'Brien. Jones marvels at how a coterie of mainly young, mainly white musicians can make such genuine, greasy funk, and Roth echoes the sentiment with his more philosophical observations. "For me it's definitely not like a retro thing, like 'Hey, let's randomly take this genre of music and pull it out, or let's try to do this old thing in this cool retro way,'" he says, speaking on his cell phone in a taxi rolling through Brooklyn's snow-lined streets. "It's more about going forward in the right way -- trying to find the music and the meaning that is most natural to us."

Roth's funk odyssey began during his college years (he studied music at NYU). His education shows when he talks about his musical ethos and viewpoint. "I think that sometime around the late '60s, there was a certain peak," he says. "At some point when James Brown grunted or Otis Redding whined, there was a certain peak where it was just harmony and rhythm and technology coming together in the perfect way to express the human condition. That was the most feeling that could actually be put into sound."

It definitely offers a respite from what passes for soul on today's pop and black music charts. "It sometimes feels a little bit sad," says Roth. "You turn on the radio, and they announce that they're going to play some R&B. And then you hear a little computer beeping away at you. It's like 'Whoa, where's the rhythm and where's the blues?'"

But maybe the tide is turning in the direction of this new funk in the old spirit. After all, as Roth observes, "The ironic part of it is that if you listen to techno music, dance music, and a lot of pop music now, it's starting to sound more and more like log-banging -- boom, boom, boom."

So will Daptone become the latest trend-setting record label to hit the big time? "I don't think you have to worry," laughs Roth. "We're not really smart enough to get really big."