Despite its unfortunate name, Titanic charts a fine course. 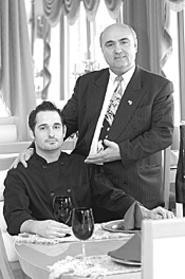 Walter Novak
Sako Satka (right) and chef Brian Davis of Titanic: The food is more than seaworthy.
We promise not to make any more lame jokes about restaurateur Sako Satka's peculiar choice of business names. Sure, he christened his upscale dining room Titanic, after one of history's greatest maritime disasters. But it's more illuminating to think of the moniker as part of the restaurant's quirky charm -- of which it has plenty -- than as a potential jinx. Besides, he explains, it was all an accident. "I meant to name the restaurant 'Tirana,' after my country's capital city," the Albanian native says. "But my lawyer couldn't pronounce it, so I just pulled a name out of the air and said 'Titanic.'"

Of course, the place did encounter rough seas when it opened in the Warehouse District last summer. But after a brief stay on West Third St., Titanic and her crew set sail for Lakewood, reopening last month at 15315 Madison Ave., in the former Martini's space.

Although guests are apt to either love or loathe the restaurant's stylistic statements -- from the endless loop of Viennese waltzes playing in the background to the elaborate, artful, but not entirely practical place settings -- we're betting they will uniformly rave about Executive Chef Brian Davis's imaginative lunch and dinner menus, filled with sunflower-seed crusted this, Romano-coated that, and an interesting, if not completely successful reinterpretation of the commonplace coconut shrimp: four plump, perfectly prepared sea scallops wrapped in a tasty but unfortunately soggy coconut crust ($8).

Davis, a graduate of the Pennsylvania Culinary Institute, has been honing his skills in Cleveland kitchens for the past several years, but this is his first gig as top toque. Based on what we've seen so far, though, the guy's got the mojo: A recent dinner was filled with fresh flavors and attentive preparations, beginning with a basket of sturdy, freshly baked bread served with honey-rosemary compound butter and ending with an elegantly ephemeral, berry-topped sabayon ($7). In between, our salads (one, a $5 variation on a theme of Caesar, topped with applewood smoked bacon and grape tomatoes; the other, a $7 toss of brisk field greens garnished with sliced pear, toasted almonds, and two ample disks of warm goat cheese) arrived crisp, adroitly dressed, and prettily plated. And entrées -- this night, a thick slab of satin-fleshed sea bass on a pedestal of buttery garlic-rosemary mashed potatoes, with a side of al dente green beans ($20); and a platter of firm gnocchi, tossed with bits of asparagus, Roma tomato, and shredded crab in an honest-to-goodness saffron butter sauce, and finished with a substantial portion of lobster tail ($17) -- proved just about flawless, as well as value-priced.

Meantime, the gracious Satka has gone all-out dressing up the old Martini's space, laying down a new marble-tile floor, hanging eight crystal-encrusted chandeliers, and turning over an entire wall to a mammoth, backlit 3-D mural, by artist R. Shilliday, of the namesake ship sailing beneath a full moon, straight toward its date with destiny in a field of craggy icebergs.

While the dining room isn't much bigger than some suburban great rooms, it's dominated by oversized upholstered chairs pulled up to twin-bed-sized tables, each set with tapestry runners, gold chargers, burgundy napkins, silver candlesticks, and art-glass vases. Sure, it seems like a bit of an overstatement, but there's no denying it has a certain exuberant charm. Meanwhile, formerly unused downstairs space has been transformed into a handsome lounge, complete with a granite-trimmed bar, mirrored walls, and flat-screen TVs.