A Flock of Seagulls flies into town. 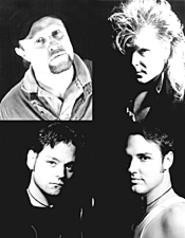 A Flock of Seagulls singer Mike Score hasn't had his space-age hairdo since the '80s, when the smash single "I Ran" ruled the airwaves for one summer. But it's still a hot topic. "In the '80s, you needed a strong image to come across," says Score. "And just because you had a weird hairdo didn't mean you weren't a good musician. Now, just because I don't have the weird hairdo doesn't mean I can't do the thing I like to do."

The band's original lineup collapsed in 1986, after two follow-ups to 1982's self-titled debut went nowhere. Score re-formed his Flock with new players in 1989 and has been touring ever since. Live shows combine new songs with old favorites (the band is actually a three-hit wonder). "The early signature sound was like playing with just one of the strings," notes Score. "The new material has a darker atmosphere." A Flock of Seagulls lands at the Tangier Cabaret (532 West Market Street in Akron) at 9 p.m. Friday. Admission is $25; call 800-826-4437. -- D.X. Ferris

Can't Wait
Funnyman Irrera stands up to his calling.

Over a career that spans 25 years, comedian Dom Irrera has turned up in sitcoms, movies, and cartoons. These are mere sidelines, he says. "I'm a stand-up comedian, and everything else is a perk," declares the Philadelphia native. Originally, Irrera set out to be an actor in New York City. Occasionally he landed parts, but he spent most of the time waiting tables. "Honestly, if I had been a better waiter, I would have started doing stand-up [much later]," he says. "I do stand-up because I can't do much else." Irrera performs at Hilarities 4th Street Theatre (2035 East 4th Street) Thursday through Sunday. Show times are 8 p.m. Thursday, 7:30 and 10:15 p.m. Friday and Saturday, and 7:30 p.m. Sunday. Tickets range from $12 to $23, available by calling 216-736-4242. -- P.F. Wilson

Joseph Evans has seen enough performances of Madame Butterfly to figure out why the opera's villain gets a bad rap. Puccini's epic takes place in early 20th-century Japan, where a marriage broker hooks up a U.S. naval lieutenant with a 15-year-old Japanese girl. Soon she loses what little she owns to his reckless lifestyle. In the Cleveland Opera production Evans is directing, the misunderstood soldier is finally humanized. "As a well-educated young American, he wants to try everything and learn everything about this new world opened to the West," offers Evans. "He doesn't realize the impact his interaction with this society will have." Madame Butterfly is at the State Theatre (1519 Euclid Avenue) at 8 p.m. Friday and Saturday and 2 p.m. Sunday. Tickets are $28 to $128; call 216-241-6000. -- Cris Glaser